The government’s plan to reduce 12% GST on housing to a flat 5% without extending the benefit of input tax credit (ITC) to developers will increase price of apartments for low and middle-income groups in most cities. Besides, it could dent the Centre’s housing for all policy as landed cost for the buyer might increase. However, it would help high value apartment sales in cities like Mumbai and Delhi.

Tax consultants feel the fundamental premise of GST, which is based on input tax credit, gets negated. “The philosophy of GST will be lost if there is a system which negates ITC on the premise of a lower output tax rate,” said tax lawyer K Vaitheeswaran. Citing an instance from the 2004 budget, Vaitheeswaran said then Union finance minister P Chidambaram exempted tractors from excise duty with a view to helping the farm sector, which was in distress. But in reality, excise duty exemption resulted  in increase in tractor prices because it rendered manufacturers ineligible for availing cenVAT (Central Value Added Tax) credit.

The thought process for a lower GST for housing might have emanated from the restaurant sector, where reduction of GST to 5% for small restaurants was widely welcomed. But unlike restaurants, where most of the purchases like vegetables, meat, fish and eggs do not attract GST, there is high GST burden for all construction raw material. Doing away with ITC would wreak havoc in the industry and those who diligently follow accounting principles, feels Vaitheeswaran. Though Credai has represented  to the Centre seeking 5% GST for housing sector, the developer community is divided on the issue. The proposed move would take away the “vatability” of GST and make it a cascading tax, thereby striking at the very root of GST, said executive VP of TVS Housing V Ganesh. 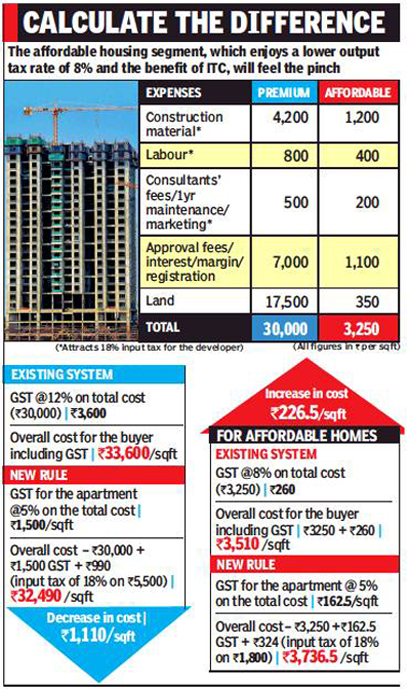 More importantly, the GST regime was brought in to achieve transparent transactions and ensure full compliance. The input tax credit made it difficult for anyone to do business with unregistered dealers. “When such a sound law is taking root in the system, removal of input tax credit will bring back bad practices and unregulated transactions,” said Navin’s Developers CMD R Kumar.

The Centre’s proposal may be sweet news for promoters and buyers of high-end apartments in metros. For instance, an apartment with a selling price of Rs 30,000 per sq ft attracts GST of Rs 3,600 per sq ft. After slashing the GST to 5%, the tax would be Rs 1,500 per sq ft. Since the margins are substantial in this segment, the builder would be able to absorb the input tax burden, said a developer preferring anonymity.

If the government’s objective is to bring down the cost of housing, a more pragmatic approach could be taken by slashing GST to 8% (like affordable housing) and extending ITC benefits to developers, said TVS’s Ganesh.