The much-awaited meeting of the Reserve Bank of India board today is likely to see the government insist that the regulator immediately announce implementation of decisions taken at the last meeting to prevent the confrontation from intensifying further.

As reported first by TOI on November 2, RBI shied away from making decisions taken at the October 23 board meeting public, even though they had been agreed upon. At Monday’s meeting, sources indicated, the two government representatives on the board will want RBI to announce the agreement that had been reached on easing credit flow to micro, small and medium enterprises (MSMEs), a revamped prompt corrective action (PCA) framework for weak banks, and alignment of capital norms for Indian lenders  in line with international standards instead of making them more stringent. The government sees these as crucial steps to ensure more lending. 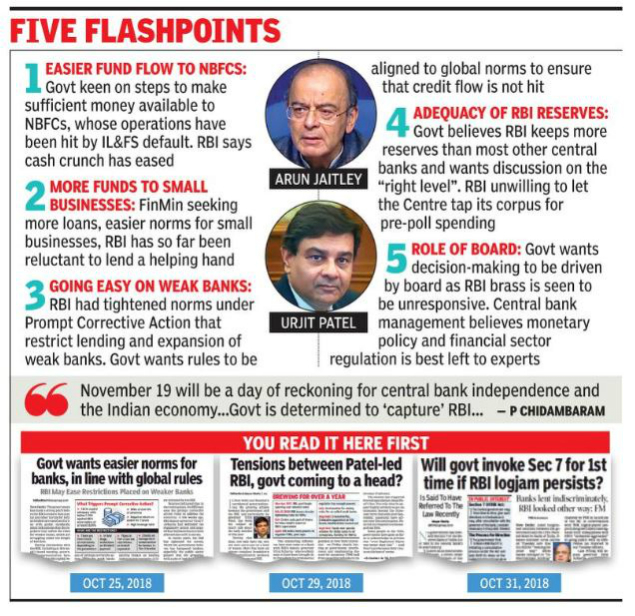 “The government will want the meeting to start from where it ended last month,” a senior government official told TOI. The Centre also plans to use the platform to seek steps to ease the liquidity pressure on non-banking financeNSE -1.09 % companies (NBFCs), which have been grappling with fund-raising problems since IL&FS began defaulting on debt repayment.

The crucial meeting that comes in the backdrop of a threat to invoke the never-used section 7 of the RBI Act , allowing the Centre to issue directions, is being closely watched after the rift between the RBI and the finance ministry spilled out into the open last month (first reported by TOI). Just before that, in a speech, RBI deputy governor Viral Acharya had cited Argentina’s example and suggested that undermining a central bank’s independence could be “catastrophic”. Many, including RBI  sympathisers, believe that Acharya’s statement was unduly aggressive. 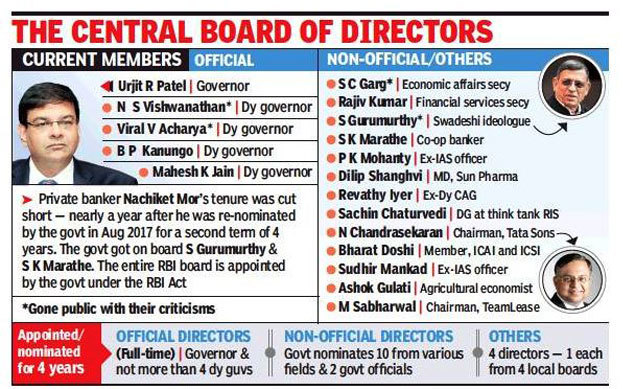 The statement came after an uncharacteristically long board meeting, where the government’s demand for addressing several of its concerns were not addressed. As reported by TOI on October 31, the government had also sought consultations with RBI on three issues, in what was seen as a precursor to invoking Section 7. This is seen as the real flashpoint given that the finance ministry and RBI were not on the same page on several issues for over a year.

For the central bank, the government’s ultimate weapon, Section 7, has emerged as a red line. People with knowledge of RBI’s thinking said that resorting to the section would worsen the stand-off between the central bank and government and deepen the crisis if Monday’s board meeting is held under the cloud of Section 7.

However, the government’s aggression may be tempered by the apprehension that the governor and two of his deputies may opt to leave if pushed too hard and create an international perception.

RBI representatives are expected to impress upon its 18-member board that the stress in certain sectors is not for want of liquidity but has more to do with a crisis of confidence among lenders and the absorptive capacity of small businesses. The central bank is likely to ballast its argument of liquidity being available by highlighting that large redemptions of short-term NBFC debt have taken place in November without any major default.

The government is, however, unimpressed with the steps taken by the regulator so far and believes that the strain on finance companies is crippling their operations and impacting credit flow to crucial sectors such as construction and small businesses.

Sources suggested that issues related to credit flow to MSMEs and problems related to NBFCs are best left to RBI. On the issue of high reserves, they suggested, a large part of the corpus is notional. It is an issue that has been debated since 1986, when then finance secretary S Venkitaramanan was involved in a bitter battle with RBI governor RN Malhotra to seek a higher share of the surplus.

The government has made no secret of its wish that the central bank should be board-run — and has come in for some criticism. According to a former central banker, unlike the US Fed board, the RBI board includes people from different walks of life. They have included CEOs of highly indebted companies, who should not be allowed to decide on regulation.

While the Centre may not actually use the dreaded Section 7, it wants the board to play a more dominant role as it believes the central bank brass is unresponsive to the needs of the economy and unwilling to engage in discussions with either stakeholders or even senior government officials.

If the Centre decides to issue directions to the central bank, there is no scope for any academic discussion and the RBI would have to implement New Delhi’s wishes without going into the niceties of the decision or providing an assessment of the impact.

A veteran central banker said the hitherto unused section should not be invoked by the government. “It has not been used during war, famine or any economic crisis. There is no reason for it to be used now,” he said. Many see this as a clash of personalities. Sources said that issues such as a new capital adequacy framework cannot be decided in a two-hour meeting but will need to be deliberated by a panel of experts who can go into past wisdom on the subject and recommend changes.