We started with complex multirate structure, with five tax slabs — 1%, 5%, 12%, 18%, and 28%. In November 2017, GST rate was slashed from 28% to 18% on over 170 items, followed by pruning of the list further in July 2018 and then in January of this year. While there are still few items (like cement), besides those contemplated initially, it’s only a matter of time that rate on these items will also come down to 18%. Structurally, this should also pave the way for simplification of the rate structure possibly from five slabs to possibly three over next couple of years, with likely convergence of 12% and 18% rate to a standard rate of 15% to 16%.

Aviation Turbine Fuel (ATF) and Natural Gas may also come within the GST ambit and so can real estate, on which consensus seems to be emerging now.

Relief for home buyers
Real estate may be the only major sector where effective rate of tax has arguably gone up in GST. To address this issue, the government is apparently contemplating to reduce the GST rate to 5% (without input credit) or around 8% (with input credit) for property under construction. While reduction of rate without restricting input credit would certainly be better from policy standpoint, in either case, home buyers are likely to be benefited.

New compliance framework
The government has proposed to introduce new return filing system by April 2019. Under the new system, input tax credit available to businesses would only be limited to the extent it is reflected on the GST portal.

It is expected that the new return filing system shall be more efficient and businesses would be provided adequate time to undertake necessary IT related customisations without any disruption in their business operations. 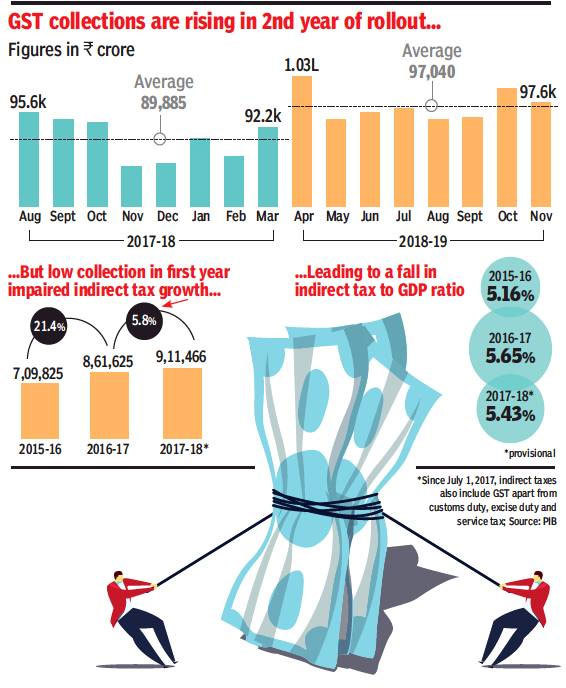 Focus on dispute resolution
In its first 18 months, GST has witnessed fair bit of litigations already. Companies have approached courts on variety of issues, including transitional issues, input credits and advance rulings issued by various states.

There have been instances where different states have taken varying positions on same issue in advance ruling issued. In the recent GST council meeting, a decision was taken to create a centralised body to address a scenario where such a situation arises. This process is likely to continue. However, it is important for the GST council to ensure that laws should be consistent across the states and exceptions such as allowing a state to impose a cess or to have a different threshold from others are avoided.

Tightening of tax administration
The GST collections have not been as buoyant as government expected. Substantial rate cuts and relief to small taxpayers mean that there would be pressure on exchequer. This would mean that larger businesses may be scrutinised with more rigour and the wealth of data, which is available to the government, may be used to check tax evasion .