With the US mid-term elections coming up next week, the fate of the Coffman-Krishnamoorthi bill, which is being closely watched by thousands of Indians who’re waiting on long green card queues, hangs in balance.

Representatives Mike Coffman, a Republican Congressman from Colorado, and Raja Krishnamoorthi, a Democrat from Illinois, had introduced the ‘Immigration Innovation Act of 2018’ in September.

Now, all the 435 seats of the US House of Representatives are up for elections on November 6. Though once the US Congress adjourns after elections, all bills in the House and Senate which have not gone through the legislation process will have to be reintroduced; the chances of that are high if the bill’s sponsors — or, at least one of them — are re-elected.

According to the organisation Skilled Immigrants in America, there are over 1.5 million Indians on H-1B high-skill work visas waiting in the US on green card queues, with an average wait time of anything between 15 years to a few decades.

The CK bill addresses this issue and proposes to enable reassignment of unused visas from previous years, exempt spouses and children of employment-based green card holders from caps, and create new conditional green card categories to allow US employers to sponsor university-educated foreign professionals through a separate path from H-1B, which will help cut down long wait times for green cards. The bill would also establish a grace period to allow H-1B visa holders to change jobs without their losing legal status to permit mobility. 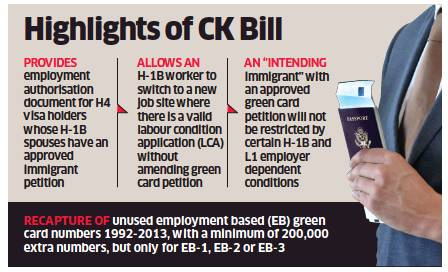 “The important issue of employment authorisation document for H4 dependent visa holders, whose H-1B spouses have a pending or approved labour certification or ‘immigrant petition’ has been addressed by the bill,” said New Yorkbased immigration attorney Cyrus Mehta. The bill also allows a H-1B worker to switch to a new job site where there is a valid labour condition application (LCA), without amending the original petition.

One of the reasons for the Coffman-Krishnamoorthi (CK) bill being seen to have greater chance for success than many other immigration bills is that Krishnamoorthi recently got bipartisan legislation on worker training and education passed and signed by President Donald Trump.

The two big takeaways from the CK bill for Indians waiting for long on green card queues are the work authorisation for spouses and dependent children of H-1B visa holders and a grace period allowing them to change jobs without losing status.

An earlier bill in the US Senate by Republican senators Orrin Hatch and Jeff Flake, too, had addressed some of these issues, including increasing the H-1B statutory cap, authorising employment for spouses of H-1B visa holders, increasing H-1B worker mobility, recapturing green card numbers that were approved by Congress in previous years but not used, eliminating per country limits for employment-based green cards, and allowing dual intent for student visa holders.

“If the two bills are reintroduced after the US elections, both houses could work together to iron out differences and then put it to vote,” said Poorvi Chothani, a Mumbaibased immigration lawyer. “When the House and Senate pass slightly different versions of a bill, they could appoint conferees to work out a compromise.”

For now, most Indians in the US are looking at the elections next week and specifically at Representatives Krishnamoorthi and Coffman.