Temp hiring numbers are at a four-year high as the goods and services tax (GST) has driven formalisation of the economy and ecommerce and food delivery broaden their footprint, said staffing firms such as TeamLease Services, Randstad, Quess and Xpheno. The number of new temp jobs is likely to touch 300,000, up from 130,000 last year, they estimate.

“There is a five-fold increase in temp hiring since 2015. For its part, GST not just fuelled, it compelled formalisation of labour. As a result, organised temporary staffing became the much-needed enabler for corporate India,” said Rituparna Chakraborty, cofounder, Team-Lease Services.

Before GST was rolled out on July 1 last year, unorganised and unregistered staffing companies had a pricing advantage because they didn’t charge service tax. Since then, there is an incentive for customers to choose the services of tax-compliant staffing firms, as GST allows them to claim input tax credit.

“This has suddenly made services of most service providers more economical than in pre-GST days. They can now compete against unregistered suppliers. In fact, they are in an advantageous position visa-vis these unregistered players,” said Waman Parkhi, partner, indirect tax, KPMG. 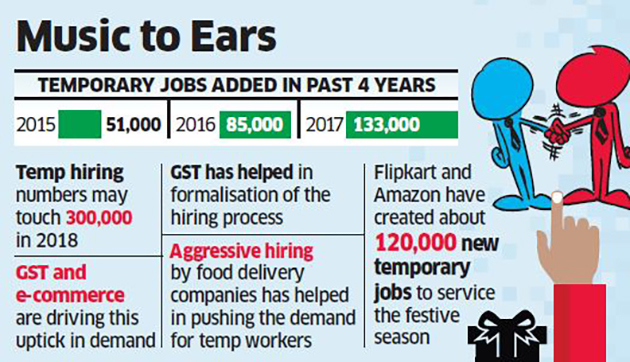 Ecommerce has been another growth driver, especially due to leaders Flipkart and Amazon. As ET reported recently, they have created about 120,000 new temporary jobs to service the festive season ecommerce surge.

“The ecommerce sector has seen an increase in hiring of temps as a direct result of the two largest players choosing to pursue an aggressive market expansion strategy,” said Randstad India CEO Paul Dupuis.

“The expansion of the logistics sector, the continued expansion of ecommerce firms like Flipkart, Amazon has also led to the increase in demand for the workforce,” he said.

This may get a further impetus as the number of online shoppers is expected to rise to 175 million by 2020 from over 100 million in 2018. Less densely populated regions generated a larger proportion of online sales this year than in the year before, said Chakraborty.

Demand is therefore not limited to the big cities–temp hiring in non-urban regions is almost double that in major urban regions and is expected to continue to maintain a 20% growth trajectory in 2019.

Hiring for the overall festive season period is 40% higher than last year and in the case of ecommerce/logistics, growth is nearly 80-100%, according to Bhatia.

Amazon added twice the number of temporary staff this festive season than it did last year. “These positions have been created in Mumbai, Delhi, Hyderabad, Chennai, Bengaluru, Ahmedabad, Pune and many other cities across the country,” said an Amazon spokesperson.