The current fiscal year is likely to be a watershed for income tax compliance and the tax department is returning the favour with quick refunds. The income tax department issued refunds to 24 million taxpayers on December 30, a 53% rise from the year ago, refuting speculation that these may be delayed as the government tries to meet the fiscal deficit target.

In terms of value, Rs 1.31 lakh crore has been paid out in refunds so far, up 17.02% over the same period in the previous year.

Earlier, refunds would taper off in the second half of the financial year as governments cut back on outgo to meet the fiscal deficit target. The government has budgeted a fiscal deficit of 3.3% of GDP for the current fiscal year .

At the end of November, the fiscal deficit had already touched 114.8% of the fullyear estimate, triggering concerns about a breach of the target. There has been speculation that the government will delay subsidy payments and slow down refunds to meet the target. 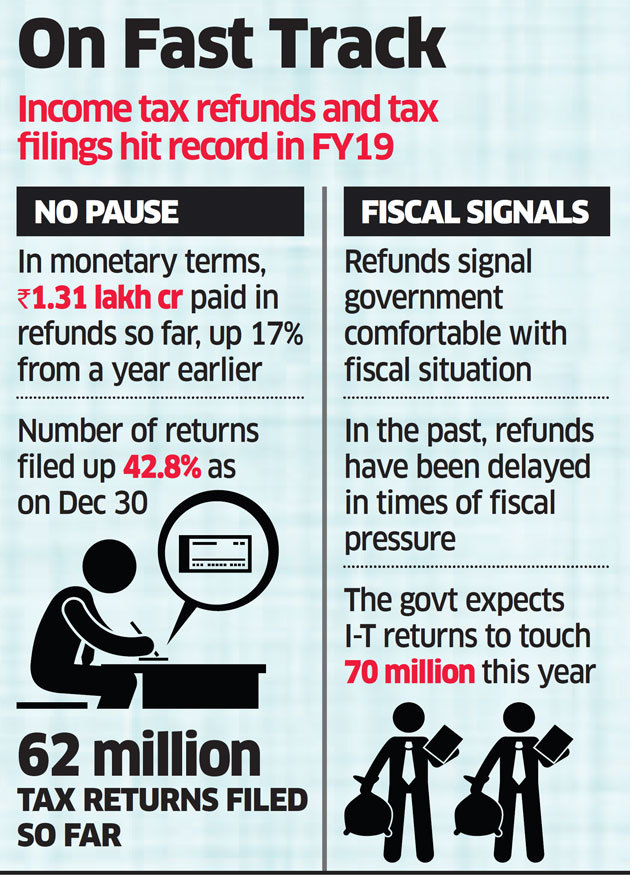 The online submission and processing of income tax returns has also helped speed up refunds. “This is highest ever issuance of refunds… The department’s emphasis is on timely issue of refunds,” said a Central Board of Direct Taxes official.

Income tax filings have also hit a record in the current fiscal year with the total so far up 43% at 62.1 million up to December .