New Delhi: India may be eyeing further reforms to lift the tax-to-GDP ratio after putting in place the goods and services tax (GST), one of the country’s biggest policy changes ever.

The tax-GDP ratio is expected to cross 12% in FY19, a new high in over a decade, but lower than emerging market peers. This means expanding a tax base that’s been eroded by large exemptions and carveouts. A simpler, non-adversarial tax regime can help in this regard.

“From all accounts, there is likely to be increasing pressure on government expenditure from 2019 onwards as competitive politics will compel enhanced spending on various social and agrarian sector areas,” said Sudhir Kapadia, national tax leader, EY India. “This would mean renewed efforts of broadening the tax base and enhancing revenues.”

One Nation, One Tax
GST created a seamless national market and ensured that consumers pay the same tax for goods and services. The GST Council has been making changes since the July 2017 rollout but deeper surgery may be needed.

An ideal GST means a single rate with negligible exemptions. In India, things are different because of political circumstance. Petroleum products, real estate and liquor remain out of its purview and there’s a plethora of rates. Kerala has been allowed to impose a 1% cess following the 2018 floods. The turnover threshold for goods was raised recently to Rs 40 lakh, but for services it remains at Rs 20 lakh.

A GST 2.0 would mean moving closer to a single rate structure with fewer exemptions, bringing all sectors within its ambit and a simpler law. Any government will find it politically difficult to tax a Mercedes and salt at the same rate and it may also need to exempt a few items such as the latter altogether. But steps to reduce such divergence would be welcome. “This will require broadening of the tax base by getting petroleum and real estate in its fold, further simplification of tax rates,  many legislative interventions and avoiding quick-fix solutions such as selectively restricting the input credit for a particular sector or accommodating state-specific changes, which dilutes the concept of ‘one nation one tax’,” said Pratik Jain, national indirect taxes leader, PwC.

A robust dispute-resolution mechanism and administration will help .

“Inclusion of petroleum products and the entire real estate value chain in GST should figure prominently in the agenda of the new government,” said MS Mani, partner, Deloitte, Haskins & Sells.

Use of the database to generate leads on tax evaders and rewarding honest taxpayers using the GST Compliance Rating tool will also generate more confidence among businesses, Mani said

Direct taxes
Direct taxes, which saw a decadal high tax-GDP ratio of about 6% in the previous fiscal, need drastic simplification with minimal exemptions for individuals and businesses That would go well with the ambitious plan of the Central Board of Direct Taxes (CBDT) for jurisdiction-free assessment. A task force has been set up to draft a new tax code but a drastic reduction in rates may not be on cards.

“The main agenda for the new government is likely to be a renewed focus on streamlining processes and removing draconian provisions which have inadvertently crept into both the GST and direct tax laws,” said Kapadia of EY, adding that more likely than big-bang reforms would be the easing of processes and ensuring better compliance .

Raising Tax-To-GDP Ratio
The tax-to-GDP ratio for India has inched up slightly in recent years, but remains well below the world average. The goods and services tax (GST) and demonetisation have helped but more measures may be needed to reduce evasion. 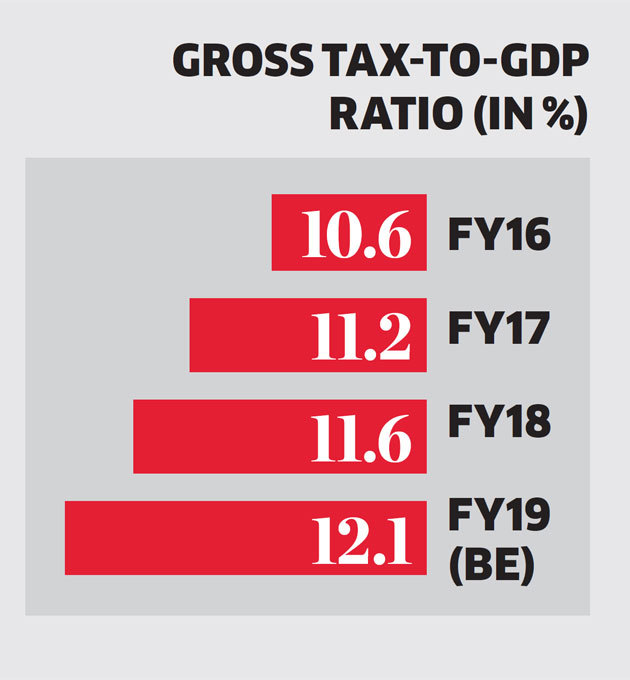