BENGALURU: The Reserve Bank of India is likely to establish an ombudsman for digital payments by March to take the load off the increasing number of complaints currently being handled by the banking ombudsman, said two senior bankers with knowledge of the matter.

Given the rapid adoption of digital payments across the country, RBI in its Annual Report for 2017-18 had said it was considering a plan to establish a separate ombudsman to handle consumer complaints related to digital transactions. The central bank is presently in the process of creating a scheme for establishing offices across the country for the digital payments ombudsman, ET has learnt.

“We could have these offices set up by early next year. The central bank is working on creating a scheme and it should function very similar to the banking ombudsman,” said one of the bankers familiar with RBI’s plans. As per RBI’s banking ombudsman scheme laid out in 2006, there are various criteria on the basis of which consumers can make complaints to the ombudsman—an RBI official in the rank of chief general manager or general manager. The two senior bankers said a similar structure will  be drawn up for the payments ombudsman. 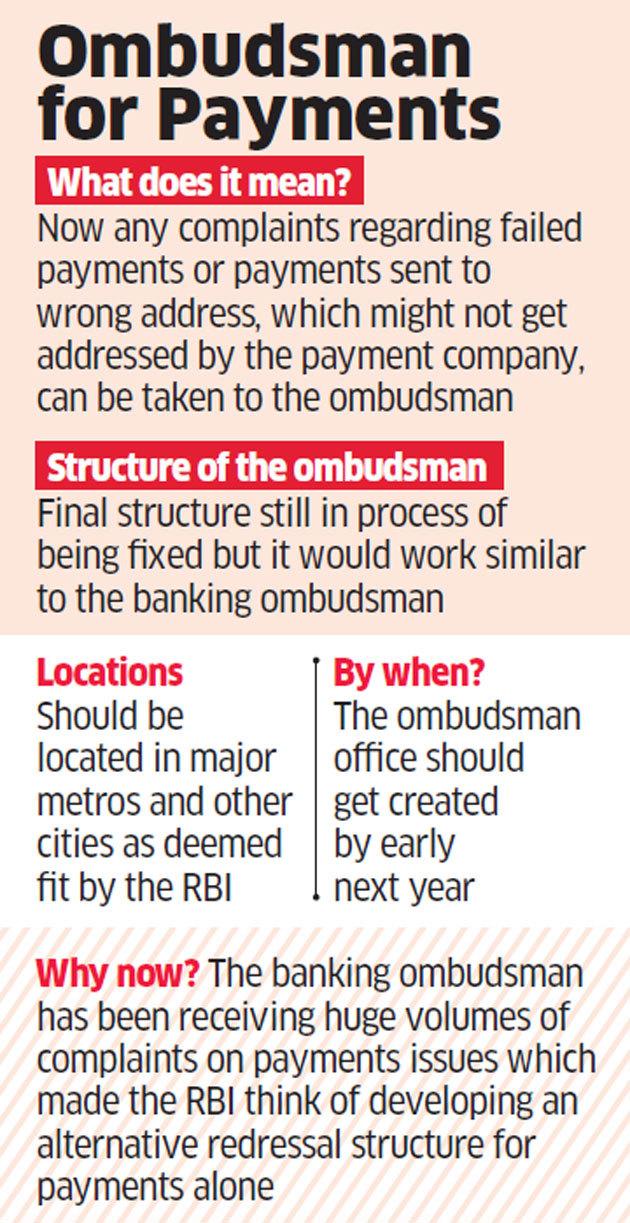 RBI did not immediately reply to queries on the matter. With digital transactions gaining at a rapid pace over the past year, multiple issues such as failed transactions or funds sent to the wrong address have been cropping up as well. This has forced RBI to sit up and take notice of such issues through an ombudsman mechanism, the bankers said.

“The central bank is also trying to draw up a framework to collect information on the various types of frauds that are being reported in the overall payments space,” said the second banker mentioned above. “RBI’s overall aim through this is to reduce instances of fraud and ensure that confidence in the payment systems goes up.”

Cos to have a Nodal Officer
The RBI had said in its annual report in August “the increasing volume of complaints involving digital payments being received by the offices of the banking ombudsman and the large number of prepaid payment instruments issued by banks and non-bank issuers have necessitated establishment of a separate ombudsman for digital transactions.”

RBI last year issued instructions to mobile wallet issuers and non-banking payments entities to establish a publicly disclosed customer grievance redressal framework. “(PPIs will be) designating a nodal officer to handle the customer complaints, the escalation matrix and turnaround time for complaint resolution. The complaint facility, if made available on website/mobile, shall be clearly and easily accessible,” RBI said in a master circular issued in October 2017.