India’s tax officials will take into account the new policy framework for startups that was announced on February 19 and not press ahead with showcause notices that have already been issued, providing relief to enterprises caught up in the angel tax net.

Also, cases in which assessment proceedings have been initiated will be resolved in line with the new policy that has provided substantial relief from the tax to startups.

The Department for Promotion of Industry and Internal Trade (DPIIT) and the Central Board of Direct Taxes (CBDT) have held detailed discussions on the issue, said a government official.

Startups will not be asked to cough up payments on tax demands already raised if they are within the exemption framework announced by the government.

“The new policy is in place… Tax authorities will take cognisance of it,” said the official, allaying industry concerns over the latest changes to the startup framework not benefiting those entities against which action had been initiated.

The official told ET that in cases where show-cause notices have been issued, startups can submit the latest notification to authorities in their response. Officials have also been directed to not press for the deposit of tax dues and take the latest changes into account. In cases where assessment proceedings have been initiated, companies can submit the new notification to appellate bodies.

“Appellate authorities are expected to take these changes into account,” the official said.

Section 56 (2) (vii)(b) of the Income Tax Act provides that if a closely held company issues its shares at a price more than its fair market value, the amount received in excess of the fair market value will be taxed as income from other sources. This section, touted as an anti-abuse measure, was introduced by former finance minister Pranab Mukherjee in 2012. 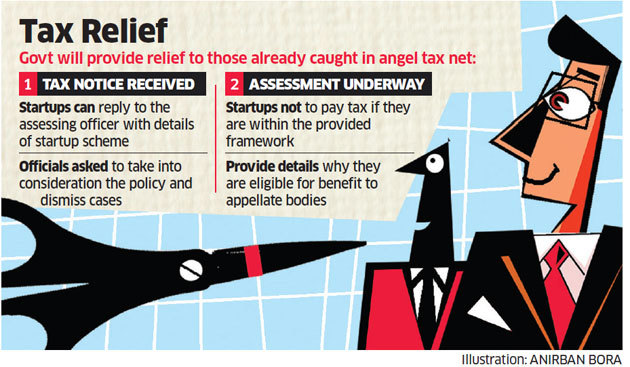 Addressing Startup Concerns
A number of companies that received angel investment got embroiled in this angel tax, triggering concern among the startup community, which the government has been keen to encourage, seeing it as an engine of growth and job creator.

The government subsequently drew up a special policy framework and amended it thrice to facilitate startups and address their concerns. In the latest round, the government widened the definition of startups to include entities that have been in operation for up to 10 years from the date of incorporation or registration instead of the previous seven years .

A firm can be a categorised as a startup even if its turnover for any of the financial years since its incorporation hasn’t exceeded Rs 100 crore instead of the earlier cap of Rs 25 crore. Investment limit for exemption from this tax has been raised to Rs 25 crore from Rs 10 crore.

Besides, investments by listed companies with a net worth of Rs 100 crore or turnover of Rs 250 crore in an eligible startup will be exempt from Section 56 (2), beyond the Rs 25 crore limit.