The Modi government was driven to consider the extreme step of invoking the never-before-used Section 7 of the RBI Act by central bank governor Urjit Patel’s reluctance to engage with stakeholders, according to highly-placed sources in New Delhi.

“He was scarce and unavailable to bankers, industry and market players even on matters of pressing concern. We were left with no choice. It’s the only way we could bring the central bank to the table,” one person close to the development told TOI.

This confirms TOI’s exclusive report of Monday that tensions between the Patel-led RBI and the government had “come to a head” because the two were not only not able to see eye-to-eye on a host of issues, but there had also “been an almost complete breakdown in communication” between them. 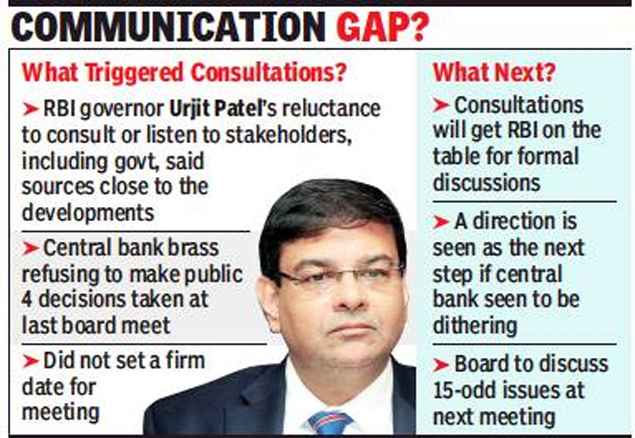 On Tuesday, TOI reported that the government had “initiated a consultative process” on three areas of concern via a set of recent communications to the RBI – and while doing so, had mentioned Section 7, without actually invoking it. “The move could be significant as a consultative process sets the stage for a government to issue directions to the RBI if there is no agreement,” the report added.

No government has invoked Section 7 of the Reserve Bank of India Act of 1934 in the central bank’s 83-year history. The Section says, “The central government may from time to time give such directions to the bank as it may, after consultation with the governor of the bank, consider necessary in the public interest.”

The Section 7 reference to RBI was the first formal step towards discussing a troika of concerns with RBI – credit flow, liquidity, and problems facing medium and small businesses – failing which the central bank would have to face the “legal instrument of last resort”, which would be tantamount to a vote of no-confidence in the governor.

On Wednesday the finance ministry issued a carefully-worded statement saying the government and the RBI should be “guided by public interest and the requirements of the Indian economy”.

The government had hoped that RBI would go by the board’s collective view instead of the governor and his deputies charting the course of the financial sector by themselves. But the central bank – which also doubles up as regulator for banks and some market segments – did not seem to go by the view of the directors. Among the 18 directors on the central board, 11 are independent, with five RBI officials and two finance ministry bureaucrats making up the complete cast.

At last week’s board meeting, it was decided that four decisions that had been taken would be made public. However, RBI, which it now appears, had reluctantly acquiesced into the majority decision, decided otherwise and made no disclosure about the “unanimous” calls. The radio silence came as a surprise because the directors had left the meeting convinced that RBI officials were on the same page.

At the marathon meeting, which had over 20 items on the agenda, the RBI brass had suggested that the issues that could not be decided, would be taken up at next meeting. The meeting was to be held post-Diwali. Accordingly, Patel verged on announcing a specific date but was stalled in his tracks by a top RBI official, who suggested that it was time to wrap up. Thus, the date remained undecided.

In fact, RBI’s announcement of November 19 as the date when the board would meet next, came only after some independent directors, frustrated by the delay, forced the management on Wednesday to take a decision, said sources.

While the government has faced flak for nominating S Gurumurthy and Satish Marathe on RBI’s central board, as well as removing Nachiket Mor, people close to the decision said the move was necessary and aimed at turning it from merely being a rubber stamp to a body which could hold its own while engaging with the bank leadership.

This was a significant turn. For over the years, it was the Central Committee of the Board (CCB) which had become the “real” decision-making body with the board starving itself of powers to regulate by delegating those to the CCB.

The sudden power shift, with the board asserting itself and demanding a say, does not seem to have gone down well with the RBI brass, prompting howls of protest about government interference, said a top official who has been watching the evolving dynamics on Mint Road.

Sources said that at the last board meeting, financial services secretary Rajiv Kumar made a detailed presentation on the need to align Indian standards with global norms instead of stiffening them unnecessarily. The suggestion was an attempt to convince RBI to tweak its rules for capital and PCA. There were also complaints about liquidity shortage and Gurumurthy flagged the concern about inadequate fund availability for small businesses.

While most of the board, including corporate sector representatives agreed with the view, RBI representatives, supported by some of the independent directors, did not agree.