Passing on GST cut: National Anti-Profiteering Authority may not object to higher quantities over lower prices : 16-08-2018

Would you prefer lower prices after a reduction in goods and services tax (GST) or a higher quantity for the same rate instead? The anti-profiteering watchdog does not seem to mind as long as the benefit of the tax cut is passed on.

Fast-moving consumer goods (FMCG) companies that raised the quantity of their packaged products instead of reducing prices can breathe easy as the National Anti-Profiteering Authority (NAPA) will accept higher grammage as effectively passing on the benefit, an official of the authority told ET. The industry had been concerned about NAPA accepting such as a measure.

FMCG companies have a variety of package sizes in line with market demand and many had opted to increase quantity instead of reducing the price, seeing it as a better and more convenient way of passing on the GST cut. This is most relevant for sachets. For example, a sachet taxed at 28% and priced at Rs 1 would be priced at 92 paise when GST is levied at 18%. 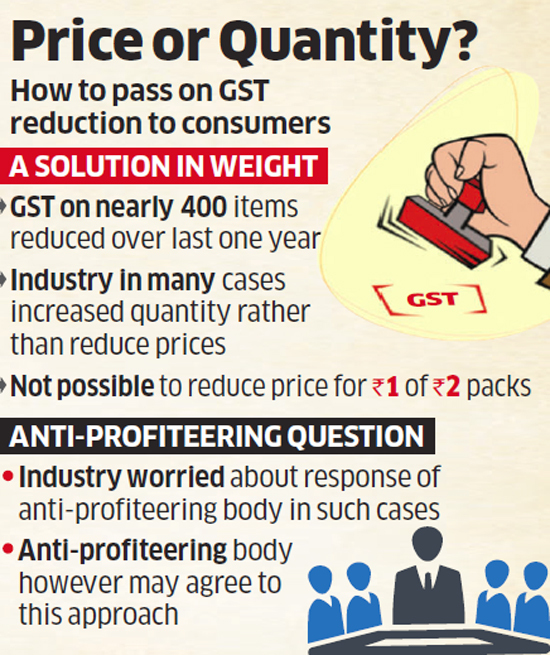 Since it’s not practical to cut prices to 92 paise, companies opted to retain the price at Rs 1 and increase the quantity roughly by 8% to pass on the benefit. Moreover, companies also don’t want to change a price point as product acceptance may get impacted if the rate is raised later. There is therefore a preference for increase in grammage. There was confusion over whether this met the anti-profiteering norm as the provisions are silent on grammage changes.

The authority can look at prevalent trade practices as well, the official said. “The authority’s job is to safeguard consumer interest, but it can’t become draconian.” Whatever their business practice, companies should be able to explain they have passed on tax cuts to consumers, the official said, adding that packaging needs to be compliant with provisions of Legal Metrology Act. The Act provides the framework for packaged products on price stickering as also quantity.

Tax experts also point to price decreases not being a viable option and say a higher quantity should be equivalent to price reduction. “Many FMCG companies have passed on the benefit to consumers through grammage increase, as in many cases reducing the price is not a viable option. Take for example, a shampoo sachet of Rs 5 or a candy of Rs 2,” said Pratik Jain, indirect tax leader, PwC. Jain said a higher quantity is the same as reducing the price of a product. “Ultimately, the consumer is getting benefited, which is the intention of the law.”

MS Mani, partner, Deloitte India, said: “Packaging changes and price-point alterations are very difficult to accomplish for many businesses. Hence, a volume increase with existing prices would fulfill the intention of the law.”