A committee headed by industrialist Baba Kalyani and comprising several developers has recommended an overhaul of the policy on special economic zones (SEZs) by changing the focus from boosting exports to investment commitments and job creation and other criteria that may be tough to measure. At the same time, it has backed fresh tax concessions, something that the Narendra Modi government has been reluctant to offer so far.

While the commerce department plans to begin consultations, after the committee appointed by minister Suresh Prabhu submitted its report recently, officials warned that a change in focus could open the government to allegations of bailing out promoters, who were unable to find businessmen to set up units. In any case, SEZs were seen as a “land grab” by large corporate houses to garner tax concessions, a bulk of which have already been pocketed. 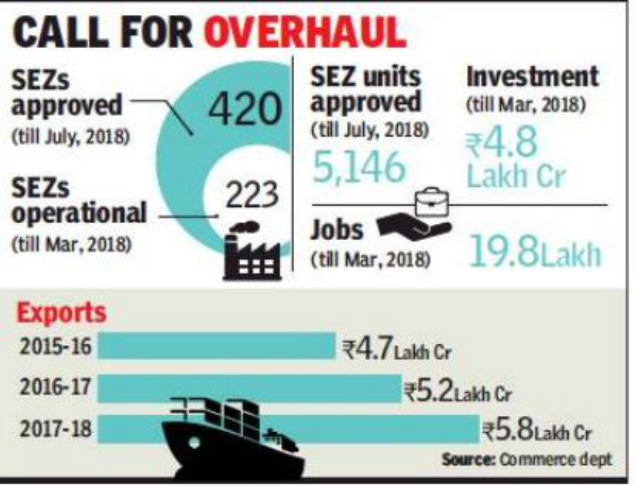 On their part, developers have been seeking concessions, arguing that the enclaves have become unviable after the UPA government reversed its own policy to bring SEZs under the ambit of minimum alternate tax.

The committee has argued that SEZs should be turned into Employment Economic Enclaves, with separate rules for manufacturing and servicesNSE 0.22 % sector, to make them compatible with WTO rules. It said IT SEZs have performed “extremely well” and there was a need to promote success in other sectors such as healthcare, financial services, legal and repair and design. Similarly on the manufacturing front, it has suggested a focus on auto, defence, electronics, medical decides and food processing, while aligning focus of the SEZ policy with the national industrial manufacturing zones, which have failed to take off.