The taxman has asked builders to choose before May 10 the new goods & services tax (GST) rate for ongoing realty projects.

The concessional rate, which came into effect April 1, was set at 1% for affordable houses and 5% for others, from the earlier 8% and 12%, respectively. Developers of under-construction projects could opt for the new or previous rate, but now they have been asked to exercise this option before Friday in the prescribed format.

This means, two people buying identical flats in the same apartment complex but in different buildings or towers, could technically end up paying different GST rates.

If the developer does not choose the rates before May 10, then the new GST rates will kick in automatically, the Central Board of Indirect Taxes and Customs said. The rules of the concessional scheme, including transitional ones, will apply, it said.

In the case of projects that begin on or after April 1, no such option is available, and these residential apartments will compulsorily have to pay the new 1% and 5% rates.

“Developers need to carefully evaluate as to which scheme is more efficient and clearly communicate to the customers accordingly,” said Siddharth Mehta, partner, indirect tax, PwC.

The builder, not the buyer, gets to choose the new rate regime. In effect, the tax component of buyers could vary from building to building even if they opt for flats in the same apartment complex, experts say. 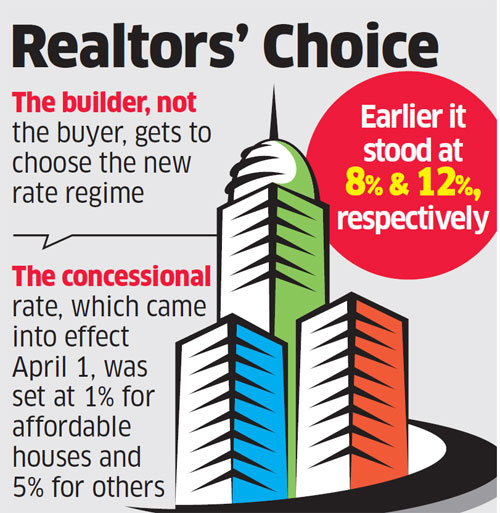 “Buyers would now face situations where buildings under construction in the same complex could be subjected to differing rates of GST as builders could exercise the option of availing input tax credits on some buildings and foregoing the credits on others,” said M S Mani, partner, Deloitte India.

If flats are booked before April 1but cancelled, the tax paid can be adjusted against any other GST liability, including the 1% or 5% rates outgo.

However, if the cancelled flats are resold after April 1, the credit availed earlier on procurements will be reversed.

In projects where one building is registered under RERA but construction, booking and occupancy of buildings vary then the rate will be determined for the project as a whole,

Deduction of land would be onethird and not on the actual land value, the CBIC said.