India’s potential loss of revenue by not taxing electronic transmissions is around $500 million every year, a research paper by the United Nations Conference on Trade and Development (UNCTAD) has said.

Of the total $8 billion of potential tax losses projected for 58 developing countries, Mexico, Thailand, Nigeria, India, China and Pakistan are the top countries to face the highest losses, the paper revealed.

The study is based on 49 “digitizable products” or those which are traded both in the physical form as well as ‘online’— downloaded from the internet such as music, ebooks and software.

The online trade of digitisable products is termed as electronic transmissions.

As per the paper, of the total, tariff revenue loss of $3.5 billion is accounted for by physical imports few years of digitisable products and $4.4 billion from electronic transmissions.

The study assumes significance in the wake of India and South Africa questioning the current practice of not imposing customs duty on electronic transmissions due to a revenue loss to the developing countries. A temporary moratorium on such transmissions gives them immunity from taxation in the World Trade Organisation (WTO). The US,
Singapore and Korea have demanded that the temporary moratorium be made permanent. These countries are also part of a plurilateral group that is negotiating global rules to govern ecommerce trade.

“Six out of 95 developing countries were net importers of physical digitizable products,” the paper titled ‘Growing Trade in Electronic Transmissions: Implications for the South’ showed . 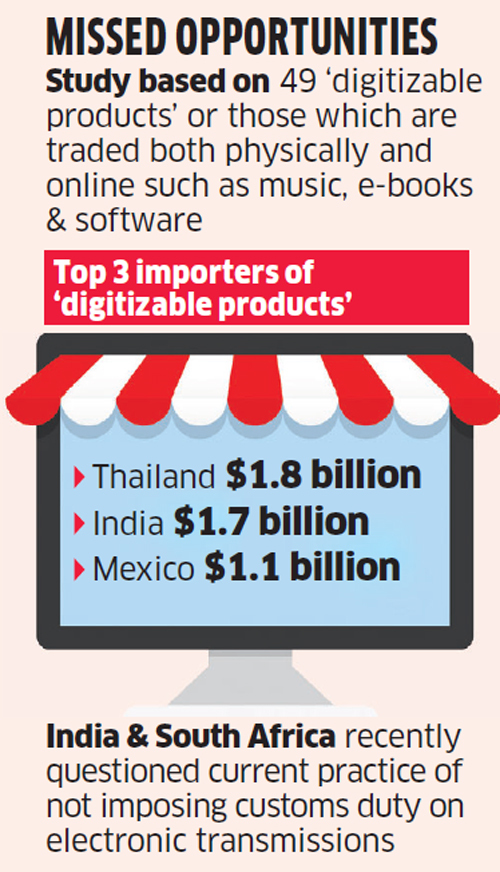 The top three net importers were Thailand ($1.8 billion), India ($1.7 billion) and Mexico ($1.1 billion) even as the share of developing countries (excluding China) in global exports of physical digitizable products declined from 6% in 1998 to 5% in 2017.

“It should be noted that the estimated potential revenue losses do not include the revenue losses accruing from loss of additional custom duties and surcharges,” the research paper said.

Potential tariff revenue loss for 33 developed countries is estimated at $212 million , it said.

CARRIER VS CONTENT
The paper said that it is unclear if custom duties were exempted for the ‘carrier’ or also included the ‘content’. Carrier of the software are CDs or diskettes while the content refers to software or music.

Citing existing literature on this issue, the UNCTAD paper said: “WTO members determine custom duties on digitizable products by the value of the ‘carrier’ medium and not by the much higher valued “content”.”

As per the study, the WTO members have failed to decide the nature of electronic transmissionswhether they are goods, services or intellectual property. This classification will define their level of trade liberalisation.