NEW DELHI: The government has clarified that both the state and central authorities handling the goods and services tax have enforcement powers over all assessees in a state, triggering fears that the industry may get caught in a crossfire between the two.

The central tax and state tax authorities are allowed to initiate intelligence-based enforcement action on the entire taxpayer base, irrespective of the administrative assignment of the taxpayers to any authority, Central Board of Indirect Taxes and Customs member Mahendra Singh wrote to officials, citing the minutes of a meeting of the Goods and Services Tax Council.

At present, for assessment purposes, there is a clear division between the Centre and state officials. States have exclusive control over businesses with a turnover of up to Rs 1.5 crore, while those with a greater revenue have been divided as per an agreed formula.

“The authority which initiates such action is empowered to complete the entire process of investigation, issuance of show cause notices, adjudication, recovery, filing of appeal, etc., arising out of such action,” according to the letter. 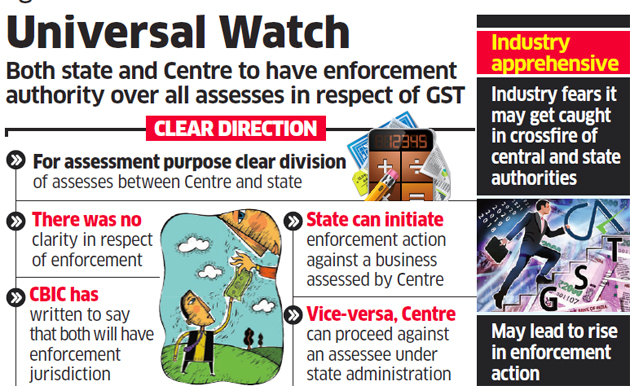 Singh’s letter comes after it was brought to the notice of the board that there was ambiguity over the initiation of enforcement action by central tax officers on taxpayers assigned to a state tax authority and the other way around. “Both the central and state tax authorities shall have power to take intelligence-based enforcement action in respect of the entire value chain,” Singh quoted from the minutes of the January 2017 GST Council meeting.

The Centre had agreed to the division of administration to get states on board for this tax reform, but there have been murmurs about differences even though a formula was laid down. Some states witnessed detailed consultations as both authorities sought to administer a particular taxpayer. In other cases, while the central authorities were keen to keep the taxpayers it had in its fold earlier, the state authorities wanted to pick up some big ones .

Industry, especially the service sector, has been wary about the division. Before GST was rolled out on July 1, 2017, the central authorities administered central excise levied on manufactured goods at the factory gate and service tax, while the state authorities focussed on retail. Companies now fear that they may get caught in the crossfire between the two authorities as both intensify enforcement action.

Experts said it may be better to centralise GST implementation. “The expectations of ‘one nation, one tax’ are also accompanied by expectations of one assessment, one authority and one body to enforce the law,” said MS Mani, a partner at Deloitte India. “In the long run, it may be better to centralise all assessment, audit as well as enforcement proceedings for a particular business with one set of authorities (central or state),” said Siddharth Mehta, partner, Indirect Tax, PwC India.

“A congruent approach could have been to involve the agency under which the assessee is registered and initiate actions through them, which would also bring administrative ease to the assessee,” said Suresh Nandlal Rohira, partner and leader, GST & Customs, Grant Thornton India LLP.