The government said clarifications to the ecommerce foreign direct investment (FDI) policy announced last month reiterated existing conditions and the intent of the exercise was to ensure that these were implemented in both letter and spirit.

It also clarified that the modified policy does not ban private labels and is not against consumers.

“Through the latest Press Note (2/2018), government has only reiterated the policy provisions to ensure better implementation of the policy in letter and spirit,” said the Department of Industrial Policy and Promotion (DIPP) on Thursday. It explained that the intervention had been required because of “complaints that certain marketplace platforms were violating the policy”.

The platforms were allegedly “influencing the price of products and indirectly engaging in inventory-based model”, DIPP said.

Press Note 3 of 2016 stipulated that an ecommerce marketplace can’t influence the sale price of goods or services. “An ecommerce platform operating an inventorybased model does not only violate the FDI policy on ecommerce but also circumvents the FDI policy restrictions on multi-brand retail trading,” DIPP reiterated on Thursday, adding that the latest press note issued on December 26 was aimed at ensuring that the rules were not circumvented.

Besides tightening inventory-based provisions, the latest press note bars any entity related to ecommerce platforms from selling on that site and imposes a limit on how much one vendor can sell on a particular portal.

It also prohibits ecommerce platforms from giving preferential treatment to any supplier. It further said that FDI is not permitted in the inventory-based model of ecommerce, which amounts to multi-brand retail. The current retail policy does not allow FDI in multi-brand retail. 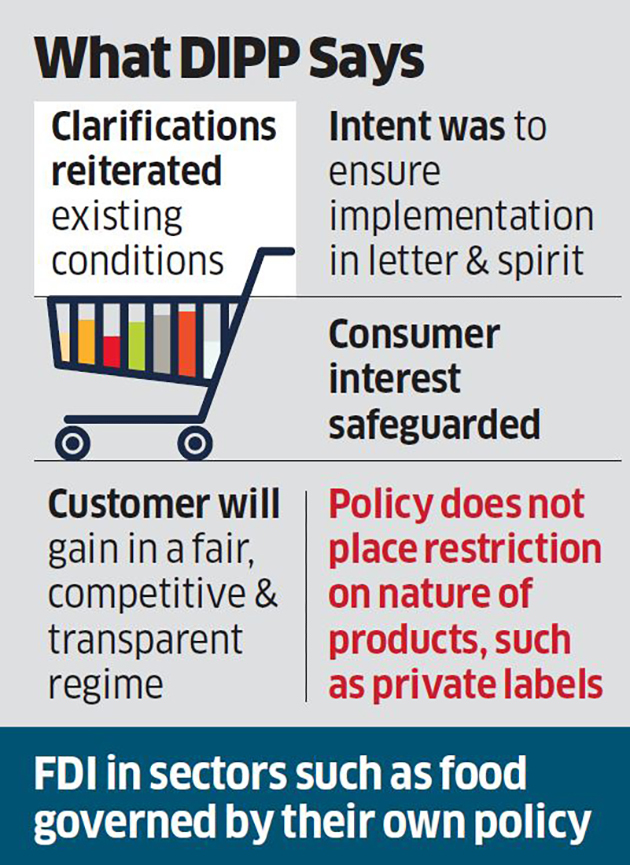 PRIVATE LABELS
On the issue of private labels, DIPP said, “It is clarified that present policy does not impose any restriction on the nature of products which can be sold on the marketplace.”

Following the press note that clarified the policy, there were concerns that the sale of marketplaces’ own private label products would not be permissible. Flipkart, Myntra and Amazon India, among others, have introduced private labels and in-house brands at lower prices.

CONSUMER INTEREST
DIPP stressed that the provisions are not against the interests of consumers, noting that only fair, competitive and transparent business practices will be beneficial for buyers.

The clarification assumes significance in the wake of advocacy groups such as the US-India Strategic Partnership Forum and the US-India Chamber of Commerce expressing concern that the tightened norms would have a longterm negative impact on FDI as well as consumers.

“There are different views on how best consumer interests are protected and promoted. It is felt that fair, competitive and transparent business practices which are in compliance with law will better protect consumers in both short as well as medium and long term,” the department clarified.

It also said the changes relate only to ecommerce and FDI in other sectors such as food continue to be governed by their specific provisions.