Indian tax authorities are inundated with pleas from various trade bodies — some believed to be acting as proxies for large industry lobbies — to soften the benami law that was activated two years ago to tackle the menace of holding properties and assets in someone else’s name to escape tax, sidestep regulations and even fool creditors.

The tax department has invoked the law to question a string of transactions which includes outright sham deals such as borrowing from shell companies in Kolkata to roping in a member of the tribal community as a partner in a firm to acquire land in the Chhattisgarh tribal belt.

The law, claim tax practitioners, has been stretched to slap notices on corporates using opaque structures to build land banks as well as to outfits in states where locals have been used as fronts to buy properties to circumvent state laws.

“There are several representations for amendments which, if enacted, would dilute the law to a great extent. The income tax Act can point out the generation of black money, but the benami Act focuses on the application of black money and is thus more effective,” a senior income tax official told ET. 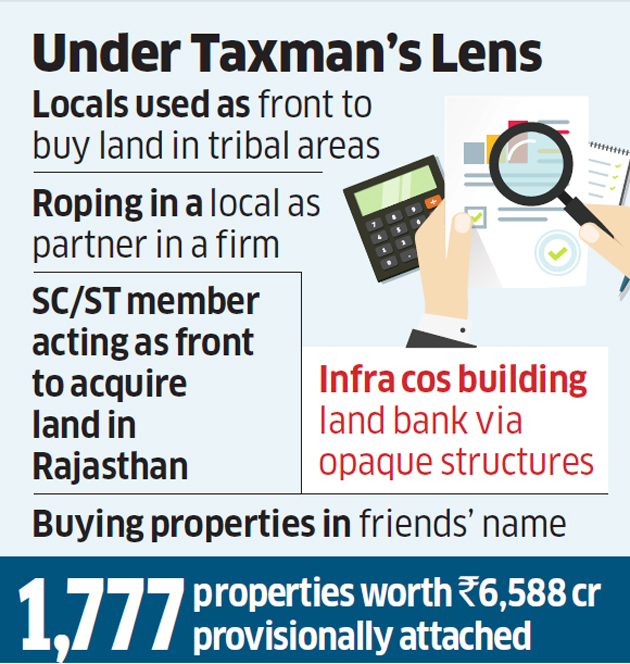 However, according to lawyers and chartered accountants, the law touches upon grey areas and has put a question mark on old, accepted practices.

“For instance, corporates often set up multiple vehicles to buy land. Such deals are cut quietly so that the company can negotiate without driving up the price. In one case, such vehicles of an infra company have been named ‘benamidars’, the land purchased has been described as ‘benami’ property, while the parent has been named the ‘beneficial owner’ in the notice served by the tax department. This, despite the existence of agreements between the parent company and the structures. So, the bigger question is, should companies abstain from such structures which are nontransparent but otherwise allowed under the Companies Act?” said Ashwani Taneja, former member, Income Tax Appellate Tribunal, Mumbai bench.

For companies incorporated outside the North-East, the practice has been to hire a local as a partner for acquiring properties due to restrictions imposed by some of these states. For the taxman, some such transactions, where the land is held in the name of the local (who serves as a partner of the firm financing the acquisition), are benami in nature with the son of the soil playing the benamidar and other partners being beneficial owners.

“One of the reasons for holding a property in a benami name can be the utilisation of untaxed black money. Apart from this, there can be several other reasons, like defrauding the creditors, including banks, circumventing laws, etc… The department is not questioning regular transactions under the Benami Transactions (Prohibition) Act, 1988. The benami properties are only being provisionally attached, and that too with the approval of the relevant senior officer,” said Surabhi Ahluwalia,  commissioner of income tax (media and technical policy) and the official spokesperson for the Central Board of Direct Taxes, the apex direct tax body.

With the law having a wide scope, many deals are coming back to haunt assessees. More than 400 notices, pertaining to land deals, have been served on parties in and around Jaipur for transactions aimed at circumventing the law that restricts a member of a scheduled caste from selling land to a member outside the community. “Typically, such deals were struck with the help of another SC person who acted as a front to buy the land and subsequently surrendered it with the state development authority .Once this was done, the actual beneficial owner purchased the land from the state body,” said another lawyer.

According to senior chartered accountant Dilip Lakhani, while some are clear cases of benami deals, there are others where the law is invoked on the basis of a declaration by the benamidar. “Say, a chauffeur with a salary of Rs 20,000 is found to have a flat on Napean Sea Road registered in his name. Now, if he admits that the property actually belongs to his employer, there is a good reason to invoke the benami Act. But consider this: a company receives a Rs 50-crore cheque as loan from a bogus  company. Earlier, this loan would have been treated as income and taxed. And if the promoter of the shell company, during the course of interrogation, says the money actually belongs to the borrower, then the law is invoked merely on the basis of a statement by a person, and not any evidence,” said Lakhani.

Persons booking properties in the names of friends or relatives (not specified under the law), perhaps for personal reasons, can be pulled up by the department. “…if someone has tax-paid money, there is no reason why he/she should acquire any benami property with it,” said the CBDT official.

According to her, the term ‘benami transaction’ is exhaustively defined in the amended Act to effectively check any unwarranted action or enquiry against persons entering into genuine transactions.