A seemingly missing provision from the fine print in the amendments to the central goods and services tax (GST) law approved by parliament in the monsoon session has led to a furore in the industry.

Tax practitioners say the latest changes deny carry forward of credit for cesses, as intended, but credit for service tax has also been done away with.

A government official, however, played down the concerns saying the interpretation being drawn is erroneous. He told ET that the government will issue a clarification if it is so needed as the intent of the law is very clear.

The issue, experts say, stems from the retrospective amendment to Section 140 (1) of the CGST Act 2017 that empowers assessees to transition the closing balance of cenvat (central value added tax) credit in the erstwhile indirect tax regime to the GST regime .

While the intention was to ensure that the credit of various cesses was not transitioned, the amended section replaces “amount of cenvat credit” by “amount of eligible duties.” 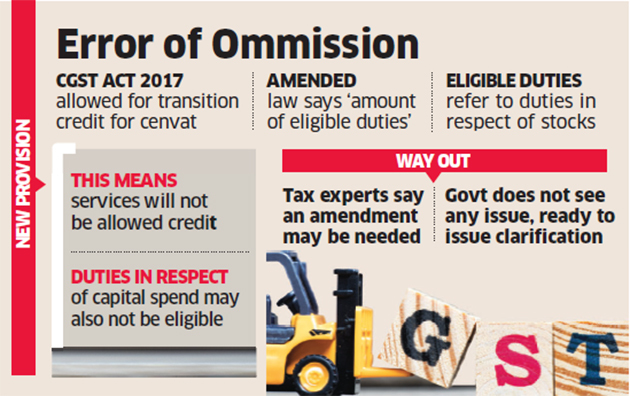 The term “eligible duties” is defined to mean a specified list of duties in respect of inputs held in stock and contained in semi-finished or finished goods held in stock on a particular day. This explanation leaves out service tax.

“Though unintended, absence of ‘service tax’ under eligible duties under explanations to Section 140, would mean that eligible credit of service tax transitioned under GST, can now be denied (as this is a retrospective amendment,” said Harpreet Singh, partner, indirect taxes, KPMG. “This lacuna in the drafting is likely to be challenged before the courts by suitable writ petitions.”

This means that only the amount of eligible duties carried forward in the returns can be transitioned to GST and claimed as opposed to the previous provisions allowing the transition of entire amount of cenvat credit.

Also, the definition of eligible duties refers only to various duties in respect of inputs held in stock but credits in respect of capital goods are not covered.

This issue will impact businesses that had undertaken significant capitalisation just before GST introduction and accumulated cenvat credit attributable to capital goods.

Experts worry that this issue could result in authorities potentially looking to bifurcate the accumulated cenvat balances and attribute the amount of credit transitioned to credits on capital goods and reject the same.

“From the notes to the legislative amendments which outline the object and reasons, it is evident that the intention was only to restrict the opening credit of cesses. However, from the reading of the revised law, it appears that restriction applies on opening credit of service tax as well as tax paid on capital goods, “said Pratik Jain, leader, indirect taxes, PwC .

Singh said: “As the CGST (Amendment) Act, 2018 is now effective, the government would need to come up with further amendment in the law to overcome this assumingly inadvertent mistake.”