Ashish Kumar could not believe his ears when a friend told him about the huge income tax refund he got last year. “The tax professional who had got him the refund charged him 15% of the amount as fees,” he says. This year, Kumar also tried his luck and sent his Form 16 and other details to the tax preparer. Sure enough, a few days later he got a confirmation from the tax department that his income tax return had been filed. In the return, Kumar had claimed a refund of over Rs 50,000.

This is where the story becomes murky. The tax preparer had filed Kumar’s return by deflating his gross income by Rs 1.65 lakh, which resulted in the refund of over Rs 50,000. The ‘professional’ claimed he had taken into account some allowances that are exempt under Section 10 but were not mentioned in Kumar’s Form 16. According to the Form 16, Kumar’s income for 2017-18 was Rs 14.85 lakh, but he declared only Rs 13.2 lakh in his tax return.

Kumar was very excited at the prospect of getting a Rs 50,000 refund. But his delight turned to despair after he spoke to a few tax experts. “From this year, the tax forms require a taxpayer to give a break-up of the various exemptions claimed in the return,” says a Delhi-based chartered accountant. Kumar’s return will obviously falsify the exemptions. The discrepancy is likely to get noticed when his return is assessed by the tax department. The computer-aided scrutiny system (CASS) will immediately flag this as a case of under-reporting. “The tax preparer has no skin in this game. It will be the taxpayer who will have to do the explaining when the tax department sends him a notice,” says the chartered accountant.

Thousands of taxpayers like Kumar may have already filed faulty tax returns with incorrect information. Conmen masquerading as tax professionals falsify information in the tax return, resulting in hefty tax refunds ranging from Rs 50,000 to Rs 2 lakh. They do so by either understating the taxable income of the individual or claiming certain tax deductions and exemptions.

No documents in online filing
This is easy because no documents have to be submitted to support the deductions or exemptions claimed in a tax return. “One can claim exemption for house rent allowance and deduction for medical insurance, home loan, education loan or even disability without having to submit any evidence,” points out a Mumbai-based chartered accountant.

However, tax experts warn that fraudulent claims of deductions and exemptions could have severe implications if the return is picked up for scrutiny. “If a taxpayer has knowingly claimed a deduction or exemption and does not have the required documents to support that claim, it is tantamount to tax concealment. Under Section 270A, misreporting of income attracts a penalty of 200% of the tax sought to be evaded,” says Amit Maheshwari, Partner, Ashok Maheshwary & Associates .

For its part, the tax department is now putting every claim under the scanner. “Most of the exemptions under Section 10, including LTA and medical allowance, can be claimed only by submitting proof of expense to the employer,” says Archit Gupta, Founder and CEO, Cleartax.in. Moreover, you cannot claim an allowance by yourself. “One can claim exemption only if the allowance is given by the company and mentioned in the Form 16,” says chartered accountant Karan Batra. But the exemption for some allowances such as HRA can be claimed even at the tax filing stage. “If the employee fails to submit proof by the deadline set by the company, he can claim HRA exemption in the ITR,” says Batra. However, the taxpayer has to submit the PAN of the landlord if the HRA exemption sought is more than Rs 1 lakh in a year. If a taxpayer claims a very high exemption for HRA, the department will also see whether the landlord (whose PAN has been mentioned) has paid tax on the rent received.

Of course, a taxpayer who does not get HRA as part of the salary can claim exemption for the rent paid under Section 80GG. However, this benefit has certain preconditions and is capped at Rs 5,000 a month (Rs 60,000 a year).

The assessment itself has become more stringent. Till recently, the TDS details in an individual’s Form 26AS used to be reconciled with the tax declared in the return at the time of assessment. “Now the tax department is also checking the Form 16 and reconciling it with the income declared in the return,” says Sudhir Kaushik, CFO and Co-founder of tax filing portal, Taxspanner.com.

Claiming false deductions
The Chapter VI-A deductions are a fecund area for fraudulent claims. Some taxpayers are not able to finish their tax planning by the 31 March deadline. Others don’t have enough liquidity for tax-saving investment. But they can still claim the entire Rs 1.5 lakh under Section 80C and Rs 25,000-55,000 under Section 80D for medical insurance. Some deductions can be significant, such as Rs 1.25 lakh for severe disability of self (Section 80U) or dependant (Section 80DD).

Tax experts warn that it has become easier for the department to detect fraudulent claims. “The Aadhaar number of individuals is now in every financial transaction. So there are ways for the tax department to find out if you actually bought the medical insurance policy for which you have claimed deduction under Section 80D,” says Shubham Agarwal, Senior Taxation Adviser, Taxfile.in. 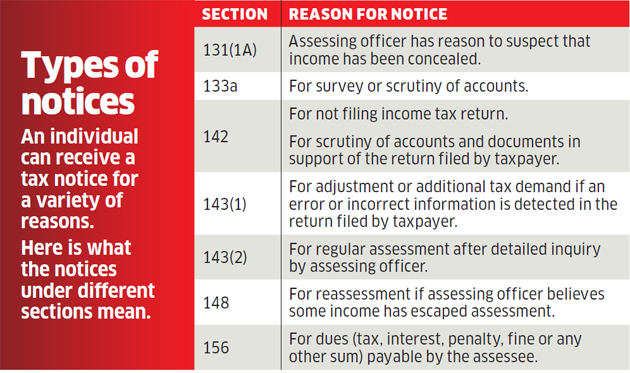 Donating a fraud
One big area of tax fraud is donation to charities under Section 80G. Under this, a taxpayer donates an amount to a charitable organisation that is eligible for deduction under Section 80G. The amount is paid back to the taxpayer in cash. The taxpayer gains by claiming deduction for the amount paid while the charity gains by converting unaccounted cash donations into legitimate money. The deduction is usually for 50% of the donated amount. So, if a person in  the highest 30% tax bracket donates Rs 1 lakh, he will be able to claim deduction for Rs 50,000 which will reduce his tax by Rs 15,450. It’s a neat trick that thousands of taxpayers resort to every year. It is high time the government cracked down on such money laundering tactics.

Every year, nearly 3-5% of the returns are selected for scrutiny. Though this is a random selection, the CASS also has other parameters that can result in scrutiny. “The data analytics capability of the tax department is increasing every day and is already quite significant,” says Maheshwari.

If your return is rejected
Normally, if there is a mismatch in the income details, the return is rejected and the assessee is given a chance to rectify the mistake, but wilful falsification of information can have serious implications. “If the assessing officer finds malafide intention in misreporting the income, he may slap a penalty and may also initiate prosecution of the taxpayer,” says Raj Khosla, Chartered Accountant and Managing Director, MyMoneyMantra.com.

“Fraudulent claims for refunds has become a big problem for the Income Tax Department,” says chartered accountant Batra. Earlier this year, a tax refund racket was busted in Bengaluru. A tax consultant filed returns for nearly 1,000 employees of top companies with inflated claims of loss from house property. Sources in the tax department say they have recently unearthed a similar scam involving tax returns of defence personnel.

How to revise your tax return
If, like Ashish Kumar, you have also filed your return with incorrect information, you can make amends by filing a revised return. The tax department allows taxpayers to revise their returns in case they made a mistake. Revising the return should be a child’s play if you have not verified your return after filing by posting the ITR-V to the CPC in Bengaluru or using your Aadhaar for e-verification. Even if it has been verified, you can still file afresh.

It is best to use the services of a proper tax consultant this time round so that your return is flawless. For the current assessment year, a revised return can be filed till 31 March 2019 or till the return has been assessed, whichever is earlier. Also, there is no limit to how many times one can revise his tax return.

Here’s how to go about it:
Fill up a form online and mention that this is a revised return under Section 139(5). You will also have to mention the 15-digit acknowledgement number and the date of filing of the original return. The new return can be filed by any e-filing portal, irrespective of how the original was filed.

Fill in the correct income and other details in the form and then follow the same procedure used for the previous return. Include all the incomes that have accrued to you during the year (FD, NSC and savings bank interest) and mention all the deductions you were eligible for. Do remember to send the ITR-V of the revised return to the CPC in Bengaluru.

In all this, remember that you are in the safe zone till you are doing this voluntarily. Once your mistake (or wilful misreporting) is detected by the assessment officer, don’t expect to be shown any leniency.