Days after the government extended benefits to start-ups around the so called angel tax, Indian Venture Capital Association (IVCA), an association of investors, said these weren’t enough and sought additional leeway.

Members representing IVCA proposed that rather than the current method prescribed by the government to seek exemption from angel tax a blanket exemption should be introduced.

Angel tax basically deals with the premiums paid by investors while they invest in startups. Tax officials are questioning the premium paid by investors in startups at valuations that are increasing while their revenue reduces or remains stagnant. The revenue department deems the capital in excess of the fair market value as other income that’s taxable. Also, in cases where the investor is not Indian, the tax department has in the past issued notices branding such investments as  “unexplained cash credits” and charging 30% tax on them. “The recent process laid out by DIPP currently to get an exemption from angel tax is very tedious and startups have to follow that to get what’s their obvious right. Rather than asking startups to apply for exemption, no tax should be levied on any startups if they fulfil some conditions,” said Gopal Srinivasan regulatory council member, IVCA and chairman & MD TVS Capital Funds who was part of the team that met DIPP officials.

Last week DIPP had said that startups have been given more leeway to claim exemption from the tax demanded on investments by angel investors at valuations deemed disproportionate to their earnings and revenue growth. 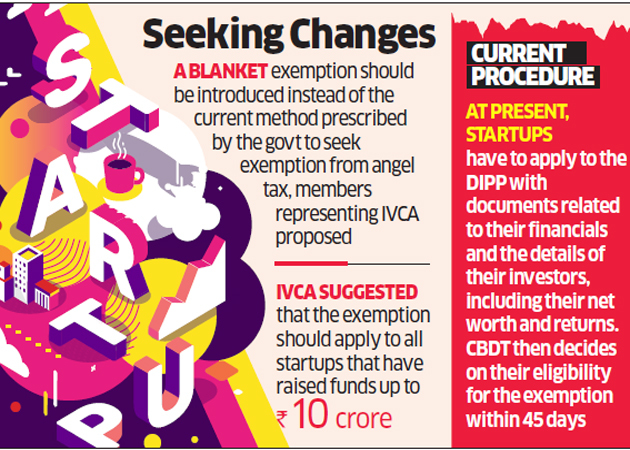 The association representing venture capital and private equity investors said that all startups should have a blanket exemption from income tax section that triggered angel tax. IVCA suggested that this should apply to all startups that have raised funds up to Rs 10 crore. The new clarification would not impact the past cases where notices have been issued, said tax experts.

Also in some cases the fresh clarification may mean more problems for the startups, said experts.

“Tax experts say that the recent clarification may mean more trouble for startups. “The criteria of meeting the dual condition of returned income of Rs 50 Lakh or more (increased from Rs 25 lakh earlier) and having a net worth of more than Rs 2 crore (or the amount of capital invested) is a drastic change which has the effect of ruling out investments from family and friends. Also, several successful angel investors are consolidating investments and are increasingly investing through special  purpose vehicles to build a portfolio.

Such entities may find it difficult to meet the qualifying criteria of Rs 50 lakhs of returned income,” said Amit Maheshwari, partner, Ashok Maheshwary and Associates In most cases, the taxman has challenged the investments made by angel funds and investors with the 30% levy that’s come to be known as angel tax.

The government said it has simplified the procedure for startups to seek exemption from angel tax. Startups can now apply to the DIPP with documents related to their financials and the details of their investors, including their net worth and returns. CBDT will decide on their eligibility for the exemption within 45 days.

Tax experts also pointed out that there the whole issue around valuations may still be present even after the fresh clarification. “The tax department apparently still wants to look at the basis of valuation in order to accept the application.

The entire issue is around the subjectivity in the valuation process which still doesn’t go away,” said Maheshwari.

However, these conditions haven’t gone down too well, experts said. In many cases, investors are not open to disclosing details because they also fund rival startups, among other reasons. Registering with the DIPP has not been well-received either and the time given to process exemption applications is considered too long.

“The current regulation of registering and the process of waiting for the government to wait for 45 days are quite bureaucratic and create uncertainty for investors. Any startup that has raised funds up to Rs 10 crore should be automatically exempted,” said Srinivas, chairman of TVS Capital Funds.