Irregularities of more than Rs 1 lakh cr found in cos under Insolvency and Bankruptcy Code : 22-04-2019

Forensic audit of over 200 companies facing corporate insolvency resolution action under the Insolvency and Bankruptcy Code (IBC) has revealed irregularities of more than Rs 1 lakh crore, including possible diversion of funds.

The ministry of corporate affairs, which is responsible for implementation of IBC, is expected to initiate action against the promoters, directors and even auditors in some cases, although it is stretched for manpower and resources, sources told TOI

Apart from siphoning of funds, instances of transactions with related parties and several other irregularities have been found, including involvement of banks. Forensic audit refers to an independent evaluation of an entity’s accounts and transactions to detect data and evidence of fraud and financial irregularities. In cases such as Jaypee InfratechNSE 4.35 %, the forensic audit had revealed how the parent Jaiprakash Associates used the land bank available with former to secure loans from banks with representatives of the lenders playing ball. Irregularities have also been found in case of Amtek Auto and Bhushan SteelNSE -2.75 %. 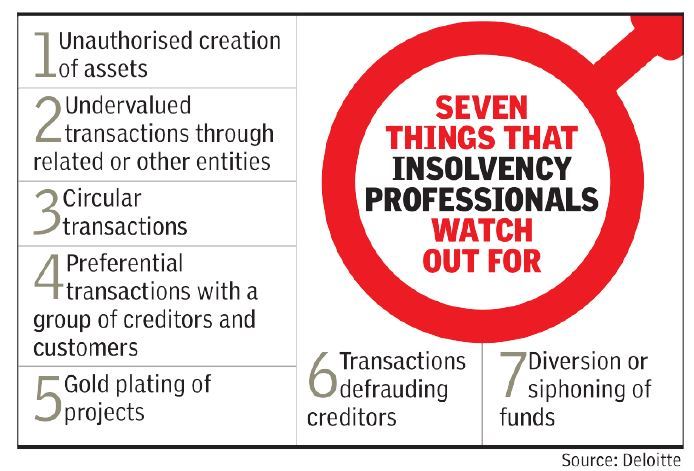 In a majority of the dozen high-profile cases referred for action by the Reserve Bank of India, irregularities have been noticed, which also being probed separately by agencies such as the Serious Frauds Investigation Office.

In most of the cases taken up under IBC, forensic audit was initiated by the resolution professional appointed by the National Company Law Tribunal although the coverage is limited to the preceding few years. In several cases, including some of the high profile ones, the lenders had conducted a forensic audit even before the company was referred to NCLT under the insolvency process.

IBC empowers the resolution professional to seek an audit to detect if fraudulent transactions were undertaken, with the creditors also empowered to seek action in case the NCLT-appointed custodian fails to act. In fact, a ruing by NCLT’s Hyderabad bench has made it simpler for creditors, including banks, to get a forensic audit. The bench had ruled that creditors could seek forensic audit if 51% of them voted in favour of the move. Lawyers, however, pointed out that there are limitations in the  law. For instance, IBC only provides for probe of related party transaction for two years prior to the initiation of insolvency action. For others, it can only go back up to a year.

Between December 2016, when the provision of corporate insolvency resolution came into force and last December, 1,484 cases have been referred for action under the IBC, of which close to 900 were still to be resolved. Nearly half the cases were initiated by operational creditors such as vendors.