Worried over a slowdown in exports, the government is looking to use India’s good relations with other countries to push up exports through governmentto-government (G2G) trading arrangements for food products.

The commerce department is exploring export of non-Basmati rice to the Philippines and Indonesia, and sugar to Egypt under this mechanism to boost exports that have been hit by rising protectionism globally and slowdown in trade.

The department sent a proposal to Egypt last week to participate in its sugar tender.

“We want to increase total exports and G2G trade is one such arrangement. This was a common way to trade a decade ago and is being revived now because many countries float tenders to procure food,” said one official aware of the details. “We want to be part of that procurement.” 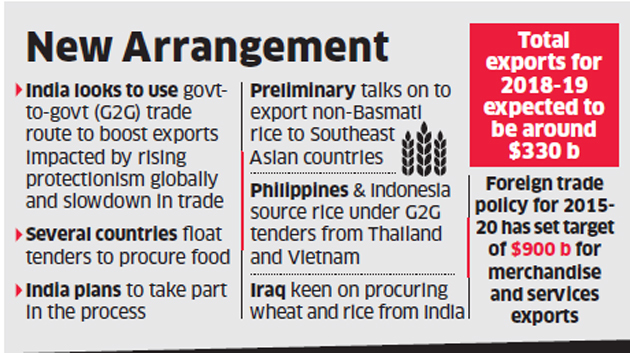 The foreign trade policy for 2015-20 has set a target of $900 billion for merchandise and services exports by 2020, which is seemingly unachievable due to muted growth of traditional exports such as gems and jewellery, farm and engineering, liquidity crunch stemming from the Goods and Services Tax, and global factors.

Agriculture is one of the nine sectors that that the department has identified to take overall exports to $400 billion in the next five years.“The talks are at a preliminary stage. We are exploring if Indian non-Basmati rice can be exported to Southeast Asian countries through our state-run trading firms,” said another official .

At present, the Philippines and Indonesia source rice under G2G tenders from Thailand and Vietnam. “Though a large part of their rice imports are done through private tenders, a small proportion of government tenders are floated and we are keen to participate in those,” the second official added.