India is looking to fight a lonely battle on global rules for e-commerce trade at the World Trade Organization (WTO) with close to 70 countries siding with the US to have a multilateral mechanism.

The pressure on India is evident at most global gatherings. Much to its embarrassment, the government had to drop a mention of the issue in a declaration issued after the mini-ministerial meeting hosted by it here last week, with only South Africa on its side. The draft prepared by Indian officials had talked about restraining from plurilateral agreements,

where a group of countries and not the entire WTO membership came together for a deal. Already, the US, Europe, Japan and China are seeking some sort of rules that will benefit the likes of Amazon, Alibaba and Uber by opening doors to markets across the globe. 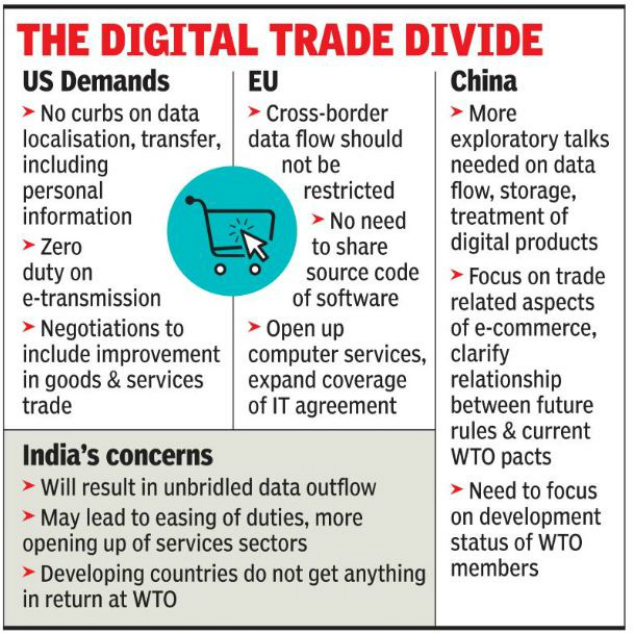 India along with South Africa and Saudi Arabia have, so far, been the naysayers. Government sources, however, said that at a recent G-20 meeting, even South Africa indicated that there is little support for blocking an international framework on e-commerce or digital trade, with a large bloc from the African continent “beginning to see the gains” that may accrue to them.

Government officials said India is going to hold firm as very little benefit accrues to consumers and domestic players. “Even if it is 160 countries in favour of global e-commerce rules, India will seek to stop it,” said a source.

India’s concern stems from the absence of a domestic policy as well as free data flow being pushed by the US and Europe. In addition, the government fears that the architecture being proposed may force developing and least developed countries to lower duties and ease restrictions on services trading, something that was being done autonomously. In fact, in its submission to WTO, the European Union has sought an expansion of the Information Technology Agreement (ITA) to cover more goods, something that India has sought to avoid and has not signed ITA-2. Many policymakers believe that signing ITA-1 was a mistake as it restricted the government’s ability to impose import duty on several electronic goods.

The US and EU members, for instance, have openly sought removal of data localisation requirements, although they recognise that privacy needs to be protected. Already, fintech companies and the likes of Amazon and WhatsApp have been complaining about the requirement with the Trump administration backing them. On its part, China has been less ambitious in its proposals.