Pressure from taxpayers and consultants may have prompted the government to extend the deadline for filing annual income tax returns but official data showed that up to late last week, returns filed for the last financial year had more than doubled to nearly 3 crore, with processing of refunds too keeping pace with the higher filings.

The number of refund cases cleared so far has gone up by over 81% to 65 lakh, data accessed by TOI showed. Sources said the refund amount cleared up to Thursday was almost 35% higher at around Rs 77,700 crore compared to the corresponding period last year when they added up to Rs 57,551 crore. 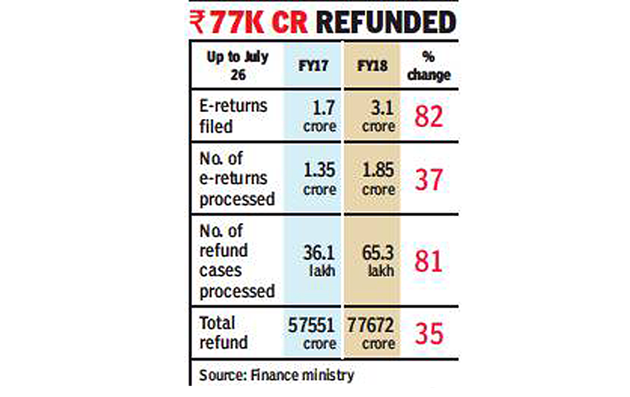 Late fee prompts better filing compliance
Nearly 60% of the returns that have been electronically filed this year have already been processed, sources said

The government is targeting an increase in return filing by individuals and plans to add 1.25 crore new taxpayers this year on the back of an addition of over 1 crore new filers in the previous year. Officials suggested that the spurt in filing was on account of individuals trying to beat the original filing deadline of July 31, when there is a bunching up. Compliance is seen to be better as the government has decided to levy a late filing fee for any return filed after the cut-off date. A fine  will not have to be paid for filing up to August 31, the new deadline.

The tax department plans to significantly expand the tax base and is tapping multiple information sources — from property registration to high-value purchases — to track those who have either not filed returns or are not disclosing their actual income. Once the returns are filed, the government will match them with the information it receives from property registrars across the country as well as jewellers, car dealers and high-end watch sellers, among others, to tally the returns .