With an aim to make the cumbersome return filing process under GST simpler, the drafts of new forms put in public domain proposes some radical changes.

The forms, which have been released for stakeholder consultation comes after the GST Council in its 28th meeting held on July 21, 2018 approved the new return formats and associated changes in law.

The forms, which will replace the current GSTR-3B and GSTR-1, are expected to be launched by January 1, 2019. The new return forms itself is expected to allow taxpayers make amendments till September 2019.

According to the draft, the format has two main tables:
a) One for reporting supplies on which tax liability arises and
b) The other for availing ITC 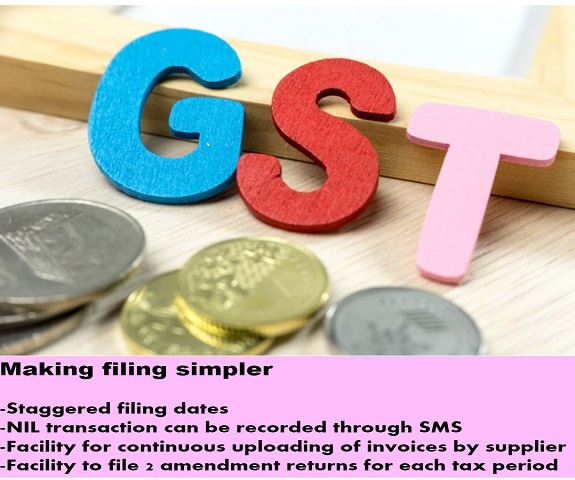 Also, the return shall have annexure of invoices, which will auto-populate the output liability table in main return. The other key details are:

a. Staggered filing dates based on turnover of taxpayer vis-a-vis 20th of next month by a large taxpayer .

b. One Nil return for the entire quarter where taxpayers have no purchases, no output tax liability and no ITC, and in such case, in month one and two of quarter, such taxpayer can report NIL transaction by sending SMS .

c. Facility for continuous uploading of invoices by supplier anytime during the month, which will be continuously visible to recipient

d. Only invoices or debit notes uploaded by supplier will be valid document for availing ITC by recipient

e. Reporting of missing invoices, whereby such reporting by recipient can be delayed upto two tax periods to allow him to follow-up with supplier

f. Liability declared in return will be discharged in full at the time of filing of return by supplier

g. No automatic reversal of ITC at recipient’s end where tax has not been paid by supplier

h. Locking of invoices, i.e. handshake between recipient and supplier indicating acceptance of entering into transaction reported in the invoice

i. Table for reporting supplies with tax liability at various tax rates shall not capture HSN, but would continue supplies at different tax rates

j. Facility to file 2 amendment returns for each tax period within the time period specified in Section 39(9) of CGST Act 2017,

“Reporting nil transactions by SMS, facility for continuous uploading of invoices, no automatic reversal of credit at recipient’s end on non-payment of tax by supplier, automatic transmission of data to ICEGATE (customs portal) are all welcome changes towards easing the compliance burden of dealers” says Harpreet Singh, Partner, Indirect Taxes at KPMG

Singh adds that allowing dealers to file two amendment returns thereby allowing them to report missing invoices and the facility to amend other details pertaining to input tax credit, would go a long way in reducing the reconciliation efforts of dealers.

a. Monthly payment of taxes and availing ITC on self-declaration basis

c. No compliance requirement with respect to – missing and pending invoices, supplies such as non-GST supply, exempted supply, details of ITC on capital goods