The decision to cut goods and services tax on more than 50 goods has come at a good time for the industry, with the festive buying season round the corner and a depreciating rupee putting additional cost pressure on consumer electronics, industry executives said. “The rate cut has been a much-needed breather for appliance market, which along with a normal monsoon this year, will have a positive effect on buying behaviour,” said Godrej Appliances business head Kamal Nandi.

Discretionary spending on electronics has been down since demonetisation in November 2016. When GST was rolled out on July 1 last year, appliances were put in the highest 28% tax bracket, thereby increasing prices by 2-3% and manufacturers hiked prices by an additional 4-6% in last one year due to hardening of commodity rates and rupee depreciation. All these impacted demand

Manish Sharma, CEO of Panasonic IndiaNSE 6.63 % and president of industry body Consumer Electronics and Appliances Manufacturers Associations, said the market is now expected to grow by 7-10% this year as compared to 3.7% last year. 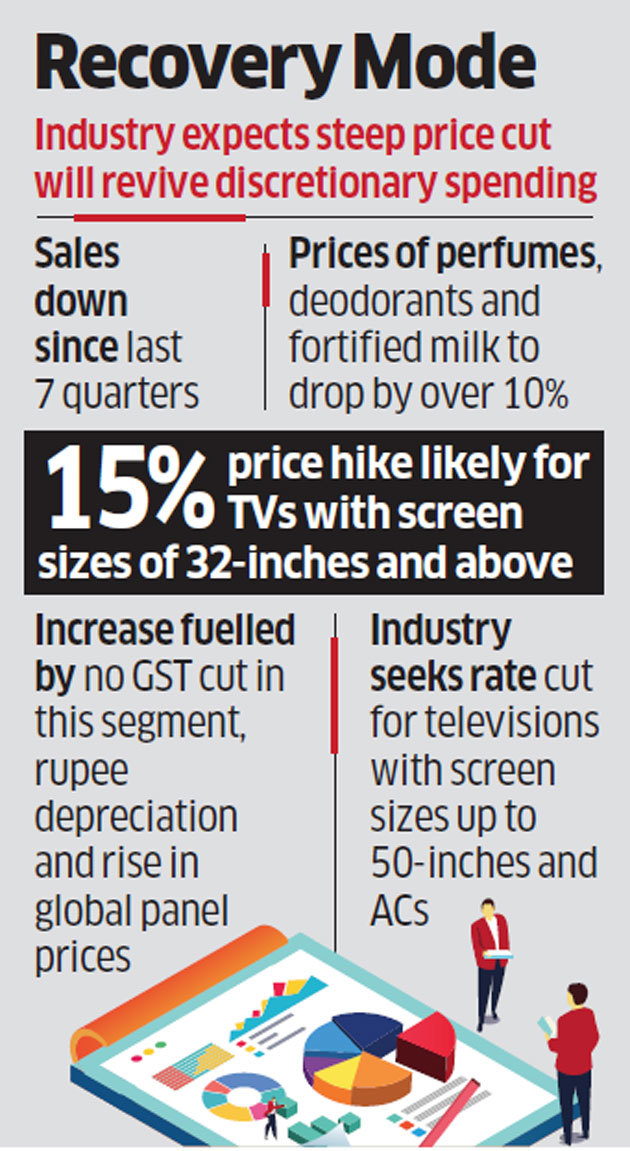 However, not all categories will get a boost — television prices for 32-inches and above screen sizes, for instance, will increase by up to 15% from August due to a global shortage of television panels pushing up international prices even as the Indian rupee continues to depreciate against the US dollar and other currencies.

Avneet Singh Marwah, CEO of Super Plastronics that sells Thomson and Kodak television brands in India, said there will be 15% price hike for televisions in the 32- and 40-inch sizes, which account for over 80% of the Indian market, while for larger screens the price hike will be 7-10%.

Smaller televisions of up to 26 inches, which account for 5% of the total market, will be insulated from price hike because they have got a tax cut.

GST is calculated on dealer price, hence the net price cut for consumers will be around 7.8%.

FMCG COS UPBEAT
Fast-moving consumer goods (FMCG) companies, meanwhile, are confident that the GST rate cut will further boost consumption that has started to pick up recently after a long lull, riding mostly on government schemes supporting rural growth and urban demand.

FMCG products like scent sprays and powder-puffs will now attract 18% GST, down from 28% earlier, while the rate on footwear of up to Rs 1,000 has been cut to 5% from 18%. The GST Council also decided to exempt sanitary napkin from the tax. It attracts 12% GST at present. Same is the case with fortified milk.

GCMMF makes a slew of dairy products, including milk and ice-cream, all of which could benefit by the nil GST on fortified milk. Sodhi said the fine print on the exact classification of fortified milk is still awaited.

A spokesperson of P&G, makers of Whisper sanitary napkins, said the company will wait for the official notification to understand how consumers can best benefit from this decision.

A senior official of a leading firm making deodorants said price cut on deodorants on the back of GST rate revision will give a boost to the category.