Faced with the prospect of paying goods and services tax (GST) on ‘free services’ provided to customers who maintain a minimum balance in their accounts, top lenders including State Bank of India, ICICI Bank and HDFC Bank are considering passing on this cost to them.

Over the past two months, the tax department has issued preliminary notices to banks seeking to levy goods and services tax on services such as issuing cheque books and additional credit cards, ATM usage and refund of fuel surcharge. The GST notices are separate from those served in April to recover about Rs 40,000 crore in service tax and penalties from all banks.

“Most banks are now considering passing on the GST cost to the customer. This would be a pure pass-through and the amount would go directly to the government,” VG Kannan, CEO of the Indian Banks’ Association, told ET. “How much the customer would be charged would differ from one bank to another as that would depend on how the free services are valued.” 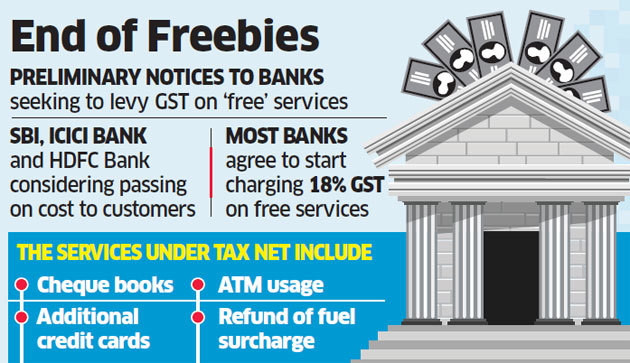 Most of the major banks have agreed to start charging 18% GST on the free services, according to people familiar with the matter. “We have agreed in principle that we would start collecting GST from customers. The mechanics need to be worked out, but since we are not that big in retail banking, we will wait for the larger banks to come out with a methodology,” said the tax head of a multinational bank.

The tax department claims that customers maintaining a minimum balance in their accounts get some free services that have a “deemed value” and are taxable. GST will be calculated taking into account the charges paid for such services by customers who do not maintain a minimum account balance.

Tax experts said the notices have come even after clarifications were provided following the service tax notices to the banks in April. “We understand that industry has represented to ministry of finance. The GST FAQs also in a way accepts that free supply cannot be treated as consideration for maintaining minimum balances in bank accounts,” said Dharmesh Panchal, deputy indirect tax leader at PwC India.

Industry experts said if the same principle is used, then other sectors that give volume or other types of discounts could also be served tax demands. “Levy of GST on discretionary charges levied by banks for nonadherence of certain parameters would increase the cost to certain categories of customers, in addition to opening avenues for many more similar cases where charges are levied without any underlying services. Many other businesses will be watching the developments in this space as technically there could be a need to pay GST on such charges in terms of Schedule 2 of the CGST Act,” said MS Mani, a partner at Deloitte India.

The GST notices have also been issued to multinational banks DBS Bank and Citibank, said people aware of the matter. SBI, HDFC Bank, ICICI Bank, Punjab National Bank, Axis Bank, DBS Bank and Citibank did not respond to ET’s queries. “Most banks could start charging GST from December. While banks would not pass on the service tax burden to customers for now, that too could happen in future as we think the revenue department is sticking to its position,” said Kannan of IBA.

Experts said tax department’s logic in determining the value of free services provided under the contract between a bank and its customer may lead to other complications and similar notices could be issued to telecom, real estate and advertising companies if the same principle is applied.