Goods and servicesNSE 0.10 % tax (GST) on annual maintenance contracts (AMCs) is proving to be contentious issue for some of the white goods and electronics companies, which have decided to play it safe and charge higher rates, increasing the burden on consumers. A leading electronics goods company, for instance, is levying 28% GST, applicable on high-end gadgets, instead of 18% that applies to AMCs. There are others too who have decided against taking any chances.

“Even though the intention behind availing maintenance of such products is uninterrupted service, in view of divergent rulings by AARs (Authority for Advance Rulings), some companies are charging higher rate (28%) even on annual maintenance services (18%) provided along with these products. This is resulting in unnecessary payment of higher price by the common man,” said Harpreet Singh, partner at consulting firm KPMG . 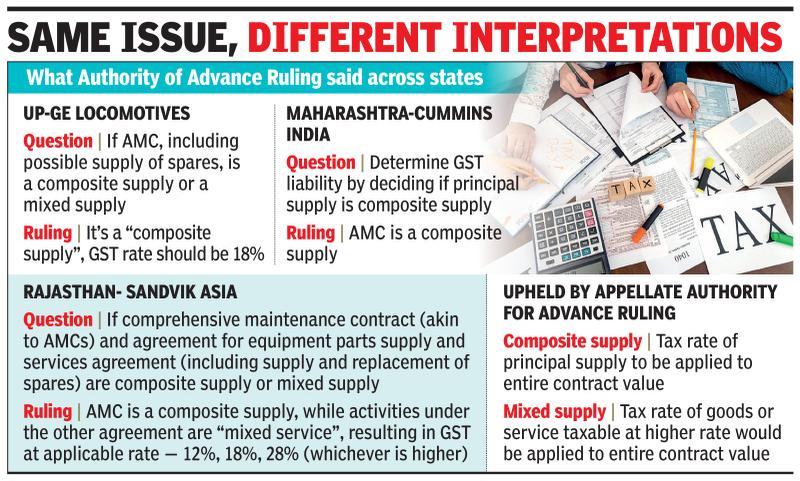 The confusion stems from the classification as a ‘composite’ or a ‘mixed’ supply. A composite supply, such as a charger bundled with a mobile phone, will result in the tax on the primary item, handset in this case, even if the rate on charger may be higher. In contrast, in case of a mixed supply — such as a Diwali hamper containing fruits (zero duty), mithai (5%) and soft drinks (28% plus cess) — the highest rate will be applied on all items.

In most cases, AARs have held a basic AMC as a composite supply, which means 18% GST even if, say, a compressor that attracts a higher levy is replaced.

But in some cases, such as the one involving multinational engineering group Sandvik’s equipment parts supply and services agreement, which includes supply and replacement of spare parts, the Rajasthan AAR and the Appellate Authority have classified it as a mixed supply, creating confusion for some companies and tax practitioners. Another tax consultant with a leading firm, however, said the issue has been sorted out as the principal supply in case of an AMC is a service .

“It is more or less a settled issue,” the consultant said. The tax practitioner said there was some confusion in case of solar equipment too but that arose from attempts to put all goods and services in the concessional bracket of 5% GST.