Insolvency proceedings: Surge in cases unlikely after suspension is lifted, says FM Nirmala Sitharaman : 22-09-2020
Businesses may heal only by end of this fiscal; migrant workers haven’t yet returned in these firms : 22-09-2020
States that don’t choose one of Centre’s borrowing options may not get GST dues till June 2022 : 22-09-2020

The government is open to providing more powers to the Reserve Bank of India (RBI) to direct lenders to take action on stressed assets, a senior finance ministry official told ET. There is a growing view in the government that there has to be some regulatory supervision over debt resolution by the RBI.

“It cannot be left to the discretion of banks — there has to be some regulatory supervision, and that should be from the banking sector regulator,” said the official.

The government, however, is keen to have a more robust framework with the oversight of the regulator.

Under Section 35 AA of the Banking Regulation Act, the central government can authorise the central bank to issue directions to lenders to initiate insolvency resolution after a default under the provisions of the Insolvency and Bankruptcy Code (IBC). The finance ministry is of the view that RBI can be strengthened within the existing framework and won’t require any changes in the law .

Still, the ministry will wait for RBI’s fresh guidelines on stressed assets before taking a final view. 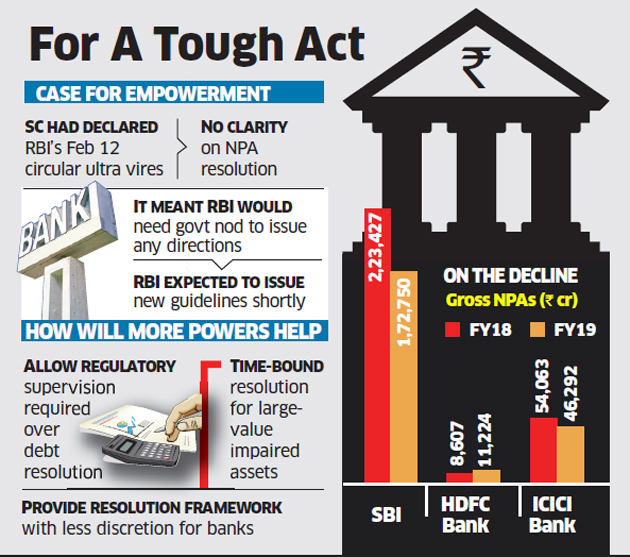 “We will make those changes but first let them (RBI) come out with the new guidelines on stressed assets,” the official said, adding that a time frame for taking high-value stressed asset cases to the bankruptcy courts is desirable

The RBI is expected to issue new guidelines on the resolution of stressed assets shortly.

The Supreme Court had drawn a distinction between powers conferred on the RBI under Sections 35AA and 35AB of the Banking Regulation Act. The RBI can only direct banking institutions to move under the IBC if two conditions are specified — that there is central government authorisation to do so and that this should be in respect of specific defaults.

Finance minister Arun Jaitley told ET in April that the Supreme Court’s judgment striking down the February 2018 circular was not a “major crisis” and was procedural in nature. It could be rectified through appropriate action by the central bank, he had said.