New Delhi: Having announced guaranteed pension of Rs 3,000 per month for 100 million unorganised workers, the finance ministry has asked the labour ministry to see if it could fund the proposed hike in minimum pension under the Employee Pension Scheme (EPS) for its subscribers from its own kitty rather than seeking funds from the Centre.

The move comes in the wake of tremendous pressure being built up on the government to raise minimum pension of EPS subscribers in line with guaranteed pension for the unorganised workers.

A high-powered committee on pension had recommended that the government increase the minimum pension to Rs 2,000 from Rs 1,000. The move would have benefitted 4 million subscribers, but would cost the exchequer Rs 3,000 crore over and above the annual outgo of Rs 9,000 crore.

“The finance ministry has written to Employees’ Provident Fund Organisation (EPFO) to know what it did to reduce the deficit and whether it could fund the proposed minimum pension hike,” a senior government official told ET, requesting anonymity.

“The pension kitty cannot fund this increased pension amount and we will communicate the same to finance ministry soon,” the official said, adding that this dillydallying on the part of the Centre has delayed the process. “However, we are optimistic it will come through before the elections,” the official said. 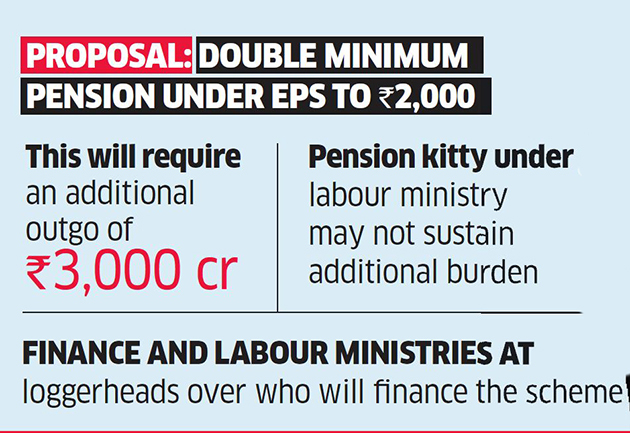 ET reported earlier that the recommendations of the committee had been sent to finance ministry for consideration. Following this, the finance ministry has now written back to labour ministry asking if it could fund the scheme.

The high-powered committee had recommended that the minimum monthly pension be raised to at least Rs 2,000 per month, provided the central government budgetary support is provided for the same on yearly basis. “Further, it may be considered along with modification of the scheme prospectively to disallow pre-mature withdrawal benefit and fix a minimum monthly contribution,” it had further proposed.

The recommendations of the committee will be placed before the sub-committee meeting on Wednesday, following which it will be tabled before the central board of trustees of the EPFO on its next board meeting scheduled for February 21.

Under the Employees’ Pension Scheme (EPS), 1995, a minimum pension of Rs 1,000 per month is given to pensioners since 2014. However, beneficiaries entitled to the minimum pension do not have to contribute to this pension kitty. Employees are automatically enrolled into the EPS scheme if they are members of the Employees’ Provident Fund scheme. Twelve percent of the employees’ salary every month goes to the EPF account while 12% of the employer’s contribution is divided into 3.67% for EPF, 8.33%  for EPS, 0.5% for EDLI and rest for administrative charges. Even the central government contributes 1.16% of the employee’s basic salary plus daily allowance. 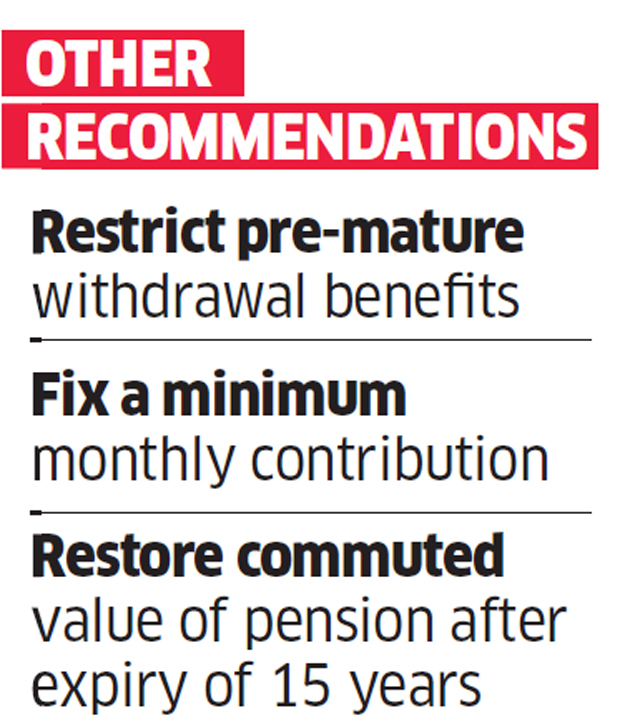 Trade unions and the All-India EPS 95 Pensioners Sangharsh Samiti have been demanding for long that the minimum monthly pension be raised from anywhere between Rs 3,000 and Rs 7,500. The recent announcement of a guaranteed pension of Rs 3,000 to 100 million unorganised workers has further build up pressure before the EPFO to increase the minimum pension to ensure the scheme stays relevant.

A parliamentary panel had last year asked the government to assess EPS 1995 and consider revision of the minimum monthly pension of Rs 1,000 saying the social security benefit was too meagre to fulfil even the basic needs .

The committee proposed that the government undertake an assessment of the pension scheme with particular reference to the right of sustenance of the pensioners, and based on the result consider revision of the amount accordingly.