Finance minister Arun Jaitley will follow established convention and present an interim budget for FY20 in February 2019 that’s expected to highlight the government’s achievements and lay out its vision for the next five years, a senior official said. He rejected speculation about a full budget being introduced months before a general election.

However, the government is not ruling out a few tax measures in the budget, citing precedents when transition budgets have included such measures.

“It will be an interim budget,” said the official, adding that discussions on this haven’t started yet. The finance ministry sought inputs from different central ministries for the budget on Wednesday. Jaitley’s sixth budget in a row is expected to be presented on February 1, 2019.

There have been reports that the government may present a full budget, taking advantage of its decision last year to bring forward the presentation by a month to the start of February rather than the end. These reports are inaccurate, said the official. Interim budgets have largely focused on the achievements of the outgoing government and offered a vision for the future. Usually, no new schemes are announced and the financial bill keeps tax rates unchanged.

The vote-on-account presented along with the interim budget seeks Parliament’s nod for incurring expenditure for part of a fiscal year, usually four months, but the estimates are presented for the entire year, as is the case in the regular budget. 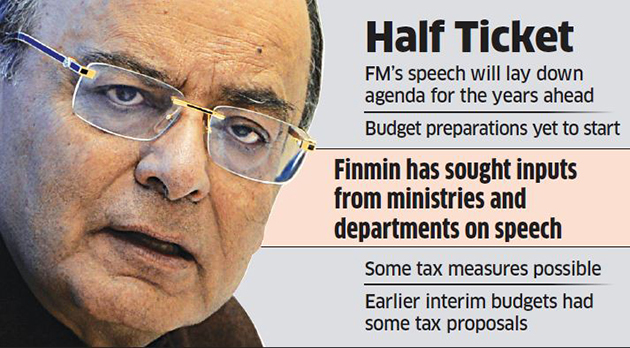 However, the incoming government has the freedom to change the estimates completely when its full budget is presented later in the year.

There have been instances of interim budgets including some tax measures. Of late, these have been mostly with regard to indirect taxes.

P Chidambaram announced central excise cuts for the automobile sector in the interim budget for FY15. Pranab Mukherjee had announced cuts in excise duty and service tax rates by two percentage points in his reply to the vote on account for the interim budget of FY10. Jaswant Singh unveiled indirect tax cuts just days before the vote on account in 2004.

Incidentally, central excise and services tax have been subsumed into the goods and services tax (GST). Any change in GST tax rates is now the prerogative of the GST Council. This reduces the room for finance minister Arun Jaitley to change rates. He can only tweak customs duties or direct taxes.