Under the plan, executive functions of the EPFO would be moved to state social security boards. EPFO will essentially be a fund manager that would declare annual interest rate on provident fund deposits based on the returns on its investments.

The idea is to reap the benefits of EPFO’s several decades of experience in managing the corpus of its six crore subscribers.

“Going forward, the roles will change. While EPFO will become the central board for managing the corpus of social security funds of all states, the latter will be a one point contact for collection and disbursal of social security,” a senior government official told ET detailing the plan. This would, however, require significant change in EPFO’s current organisational structure as it will have to hire professional investment managers for the organisation. 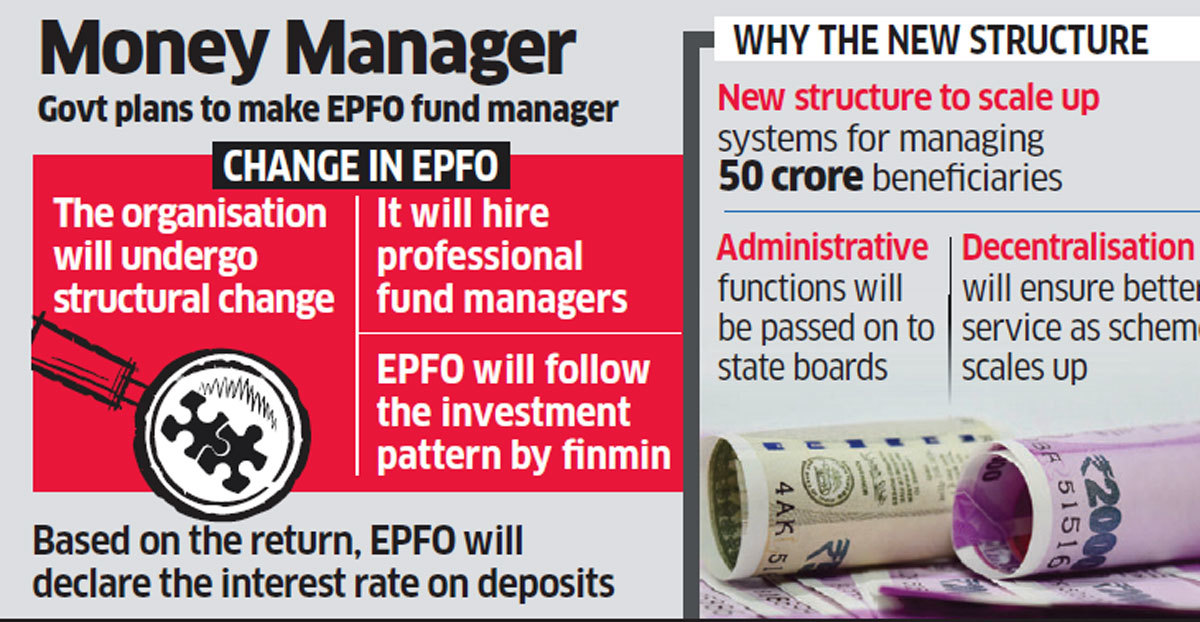 “While the finance ministry will continue to notify the investment pattern for the social security corpus, fund managers at EPFO will ensure investments are made as per the pattern in a manner that it yields maximum return for investments,” the official added .

“Besides, even the rate of return on investments will be decided and declared by EPFO and it would be binding on states to implement it or give higher returns.” Currently, finance ministry notifies the investment pattern of the EPFO that prescribes a ceiling on investments under each head for non-government provident funds, superannuation funds and gratuity funds.

As per the existing pattern, applicable since April 1, 2015, up to 50% of the PF kitty can be invested in government securities, up to 45% in debt instruments and up to 15% in equity. While government securities and debt bonds fetch around 7% annualised return, the return on equity investment under EPFO has been over 16%.

A pilot project will be launched in a few districts, and depending on its success, the idea would be scaled up across India over the next few years once the proposed legislation on social security code is passed in Parliament. Following this, funds from EPFO and ESIC will gradually be transferred to states while EPFO would assume the function of fund manager.