Conflicting rulings from tax authorities of advance rulings in different states on applicable goods and services tax rate on annual maintenance contracts have caused considerable confusion in the industry.

Sebi wants to make the approval of minority shareholders mandatory for royalty payments by listed companies that exceed 2% of annual turnover to raise corporate governance standards. The ministry is of the view that such limits may discourage companies from investing in India, said the people cited above. Companies are also against the measure.

The minutes of the Sebi board meeting on March 27 alluded to the differences.

“In addition to public consultation, meetings were also held with Ministry of Finance (MoF) and MCA (Ministry of Corporate Affairs) since many of the recommendations involved various aspects of the Companies Act, 2013, and both the ministries had flagged issues, including the issue pertaining to royalty payments which required deliberation,” according to the minutes, which ET has seen. It’s not clear if the MCA opposes the move. 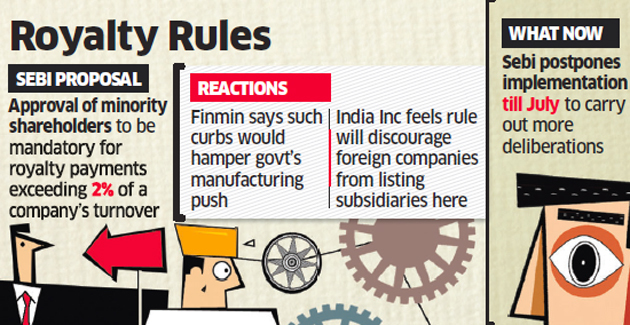 Sebi wants minority shareholders to have a say on what it regards as exorbitant royalty payments in order to safeguard their interests. The ministry feels this may hamper ease of doing business and disrupt initiatives such as Make in India aimed at boosting the manufacturing sector, said one of the persons cited above.

These reservations along with negative feedback from industry prompted Sebi to defer implementation of the royalty payment norms at the March meeting.

SIMILAR PROPOSALS BLOCKED IN 2015
Royalty is paid for the use of patented technologies, platform, brands and so on.

The Sebi proposal was based on recommendations made by the Uday Kotak committee on corporate governance, which submitted its report to the market regulator last year.

“Sebi is conducting a fresh round of consultations with finance ministry, ministry of corporate affairs and other corporate stakeholders to review the proposal,” said one of the people cited above. “Several industry

participants are of the view that the law could be implemented but the threshold for obtaining shareholder approval should be increased from proposed 2% to 5-6% of the company’s annual turnover.
Sebi and the finance ministry didn’t respond to queries.

The finance ministry had blocked similar proposals to curb royalty payments in 2015, saying such a move would send a negative signal to overseas investors and could lead to the outflow of foreign capital.

“Currently, the government is undertaking several initiatives to develop India into a manufacturing hub. Foreign collaborations and royalty payments are very important from this point of view since Indian companies will need technological help from global players,” said another source with the direct knowledge of the development. “Some of the leading global players could shy away from collaborating with Indian companies if the royalty they receive is subject to high scrutiny.”

Until 2009, royalty payments were subject to central government approval if they exceeded 5% of gross sales or $2 million per year. However, this curb was discontinued by the government in 2009 and there is currently no limit on royalty payments.

Companies have told Sebi that such curbs will discourage foreign companies from listing their subsidiaries in India. Further, getting shareholder approval every year will require the top management to devote considerable time and effort toward educating shareholders before votes take place.

A leading Indian car maker is said to be at the forefront of lobbying against the proposal, since it will be the only one of its peers affected. “Among 17 companies in the auto sector in India, there is no other listed company with majority foreign holding except one and hence, the specific company alone would be at a disadvantage and hence, it says the requirement is discriminatory,” said a Sebi official who did not want to be named.