An individual reaching out to a friend for a quick loan to tide over a crisis; a cash-strapped businessman borrowing from an acquaintance to meet a personal obligation; or, a charitable institution funding students and the ailing — normal transactions like these as well as dodgy deals by chit funds and cooperative societies to bankroll political parties before polls will be the immediate casualties of a hurried ordinance.

‘The Banning of Unregulated Deposit Schemes Ordinance, 2019’, notified last week, may be intended to protect gullible investors from dubious outfits selling ponzi and pyramid schemes, but the timing of its enactment and likely ramifications have stunned experts. Some have compared it with demonetisation, which was aimed at curbing black money and announced less than three months before the 2017 Uttar Pradesh elections.

The law permits deposits from ‘relatives’, banks, financial institutions, property buyers, customers (extending an advance payment), and for other designated purposes. Similarly, a proprietor can borrow from a non-relative as long as it is strictly for business purposes.

“However, the ability to augment resources for meeting personal and social commitments, (or) medical and educational urgencies will dry up as no amount can be borrowed from persons other than relatives as defined under the Companies Act. The definition is restricted to only immediate family members,” said senior chartered accountant Dilip Lakhani.

No Threshold Amount
“The real estate sector will be hit hard as deposits can only be accepted for a designated transaction and can be adjusted against the future sale consideration. Even if the intention of the ordinance is laudable, the language could cause difficulties to small traders carrying out business as a proprietor, partnership firm or LLP. Students and the needy taking loans from charitable trusts would (also) run into hurdles,” said Dilip Lakhani.

Significantly, the law prohibits deposits by non-voting members in multi-state cooperative societies. Based out of various states, such societies, along with chit funds — masquerading as quasi-banks — are suspected to have raised large amounts that are then lent to companies and entities that serve as fronts for political funding. In enforcing the ban, the ordinance has brought about amendments to the Reserve Bank of India Act, 1934, and Multi-State Cooperative Society Act, 2002, to explicitly state that “…a multi-state cooperative society shall not be entitled to receive deposits from persons other than voting members”. 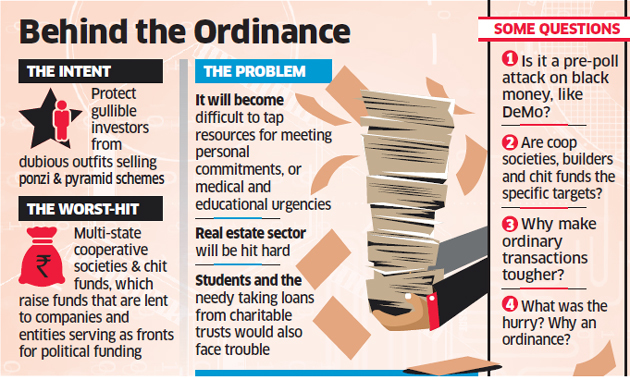 “It’s unclear what’s the new mischief that they (the government) are trying to deal with, and why it warranted an ordinance. Many bona fide transactions, particularly for SMEs, would be impacted due to the sweeping nature of the provisions… (I) don’t know whether there was enough consultation before moving the ordinance,” said Jayesh H, cofounder of law firm Juris Corp.

Acceptance of unregulated deposits could trigger attachment and freezing of assets and even imprisonment — with ‘deposit’ defined as money received by way of advance or loan or in any other form by any deposit taker with a promise to return either in cash or kind or in the form of a specified service.

“This is the biggest change after demonetisation, GST and RERA that have impacted black money. It would ensure investor protection, particularly in the real estate sector. Will it have a retrospective effect on funds that individuals and firms have on their books?” said Girish Vanvari, founder of tax advisory firm Transaction Square. “Also, there is no threshold amount beyond which the deposit would be considered unregulated. So, even a small amount of such deposits would technically be a violation,” said Lakhani.

But like demonetisation, which while trying to weed out black money impacted regular business transactions and choked acceptable funding routes, the ordinance too would create roadblocks for some. For instance, a limited liability partnership can accept deposits from partners as ‘partner’s capital contribution’ but not as ‘loan’. On the other hand, a partnership can avail of loans from relatives of partners but not from partners.