Companies get tax notices for passing off cash balance as transition credit : 27-06-2018

The indirect tax department has issued notices to companies that added cash balance lying in their personal ledger account (PLA) to the transitional credit when the tax system moved to Goods and Services Tax, triggering panic among such companies.

PLA is a cash ledger account with the central government in which companies used to add money to settle specific tax liabilities — think of it as something like Paytm but exclusively for paying indirect taxes. But PLA balance cannot be used to pay tax under GST.

As part of the transition to GST last year, companies were allowed to use unused old tax credits in their books as transitional credits to set off GST liabilities.

The tax notices said transfer of PLA is not allowed through transitional credit form, or Tran 1 form. This has caused widespread panic among several medium and large companies that were stranded with huge cash balances lying in PLA when GST was rolled out on July 1, 2017, tax experts said.

The problem is particularly acute for many companies that have operations in tax exempt zones such as Jammu & Kashmir, Himachal Pradesh and North East. This is because in many cases, the tax on raw materials was substantially higher than that on the finished products, which meant that at any given point of time the companies would have huge PLA balance as the taxes to be paid were quite less . 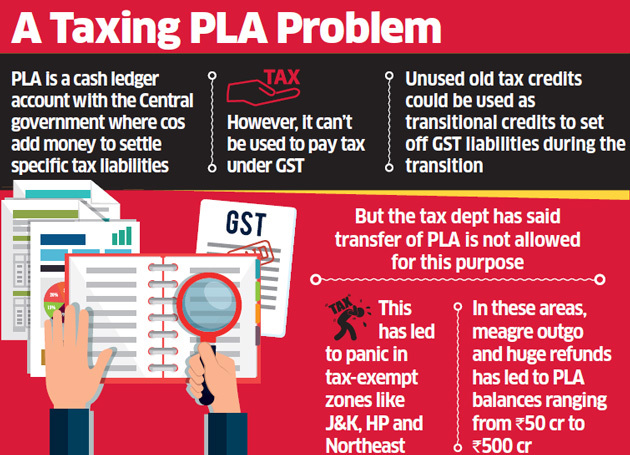 “For many companies that have manufacturing units in tax free zones…huge balances were lying in the PLA that had to be transferred back to the businesses as either refund or transition credit under GST,” said Abhishek A Rastogi, partner at law firm Khaitan & Co.

Since there is no way to withdraw the money, many companies added PLA cash balances along with other unutilised tax credits lying on the books as transitional credit.

Now, over the past week, the tax department has issued notices to several mid-sized companies as well as large pharma, FMCG and drugs companies that have presence in these tax exempt zones. More could be coming in next few days.

“Only CENVAT credit was allowed to be transferred through Tran 1. The amount mentioned by you in the Tran 1 pertains not only to the balance amount of CENVAT credit but also that of PLA balance lying with you,” read a tax notice sent to a manufacturer based in Kashmir. ET has reviewed a copy of this notice. Many companies could look to challenge these notices, people in the know said.

“We may challenge the notice seeking reversal of transitional credits before the HC (High Court) on the ground of arbitrary action and harassment and on the basis that no specific provision was created for carrying this PLA credit forward in the GST regime,” said Rastogi, who is advising one J&K-based company that has been served a notice. “It should be highlighted that there is no loss to the exchequer (revenue neutral) by this transfer to Tran 1,” he said.

Companies claimed they forwarded PLA as transitional credit because cash balances were huge — between Rs 50 crore to Rs 500 crore for many. Several companies had huge PLA balances as money that was to be claimed from the government as refunds would also get credit.

In tax exempt zones in many cases while the refunds were huge, the actual tax outgo was meagre – resulting in huge PLA balances.

“A large number of businesses had utilised the CENVAT and PLA balances before the onset of GST as that was better from a working capital and tax risk point of view and preferred carry forward of minimum possible credits in terms of the transition provisions,” said M S Mani, partner at Deloitte India.

“However, there could be a few cases where this was not feasible either due to the existence of a legacy balance caused by an inverted duty structure, cessation of operations in units having large balances, or units engaged in substantial expansion,” he said.

Companies in tax free zones, however, could not utilise PLA balances before GST rollout because the quantum of tax outgo and tax adjustments were not much.