India Inc could face a tax landmine with authorities beginning to question input tax credit claimed by companies in lieu of Goods and Services Tax paid by their vendors.

The authorities have already started sending notices to businesses, confirming fears that scrutiny will increase in the new financial year as the government looks to plug leakages. Experts said notices have been sent in Gujarat, Telangana, Andhra Pradesh, Haryana and some other states.

The issue has its origin in the provisions of the GST law that warrant a reversal of input tax credit claimed by a business if its vendor has not paid the tax for which credit is being claimed.

Currently, there is no mechanism to ascertain if vendors have paid GST. The GST Network Portal allows viewing of the return-filing status of a registered person, but payment of tax cannot be determined. At best, buyers can only verify whether vendors have included the invoice in their GST filings.

Effectively, while a business may have paid the tax to a vendor for which it wants to claim credit, it may not be possible to ascertain if the vendor has deposited the GST.

“In such a situation, requiring the buyers to forgo their input credits when they have already paid the GST to vendors and exercised due diligence to the extent possible does not seem like a fair proposition,” said Pratik Jain, national leader indirect tax at PwC. 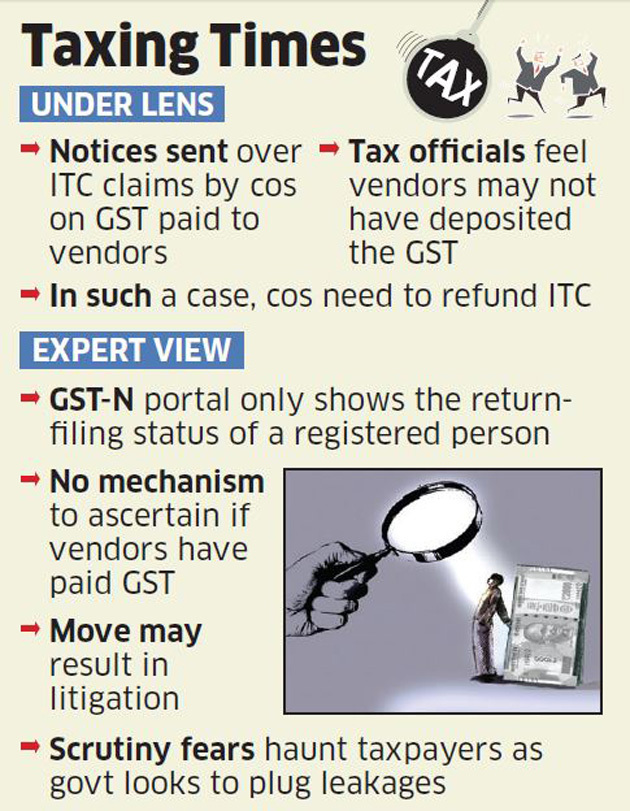 Jain said given the stakes involved, the issue is likely to result in litigation. “The government needs to perhaps review the law and amend if they deem it appropriate. In any case, there should be some guidance provided to the taxpayers as to how the government expects them to ensure that vendors have indeed paid tax,” he said.

Experts said there is a need for a facility to avail of non-reconciled input tax credits on a provisional basis as companies are compelled to pay in cash and block working capital.

Adequate safeguards to check misuse of the facility such as a time limit to complete the pending compliance/reconciliation can also be prescribed to protect revenue,” said MS Mani, a partner at Deloitte India.

They said this will induce more compliance. “This will push the sellers to be more compliant and make the buyers put robust processes in place lest they lose credits,” said Bipin Sapra, a partner at EY .