NEW DELHI: The government has cracked the whip on several large companies, which had either failed to deposit tax deducted at source (TDS) with the income tax (I-T) department or delayed the payment, with claims against top 10 such entities adding up to nearly Rs 350 crore. I-T authorities have gone ahead and launched prosecution action, while some of the companies have come forward to settle the cases. Under the law, individuals as well as companies have to deduct tax for several payments — ranging from salaries to rent and payments to contractors above a specified threshold.

The payments also have to be made during a stipulated period, failing which a company is liable to be prosecuted as the government sees this as a major violation. While a large number of cases relate to 2016-17, 2017-18 as well as the current financial year, action has been taken in cases where default dates back to 2012-13 as well, sources told TOI.

On top of the pile is Crest Logistics and Engineers, with delayed payments and defaults adding up to Rs 110 crore. Construction company HCC was also on the list, where tax authorities stepped in to recover dues of around Rs 65 crore, while Hubtown (that was earlier Ackruti City), had delayed payments of Rs 50 crore. Tax officials said apart from default by a company, the violation impacted employees and other entities who were unable to file returns due to someone else’s fault. 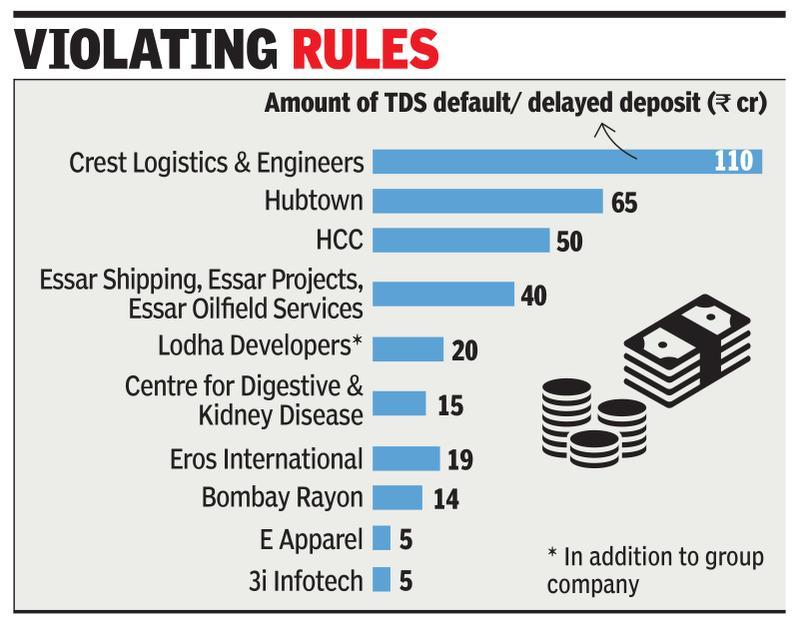 “The department’s action is not against any honest taxpayer but only relates to large violators. When action is taken against large taxpayers, they along with consultants raise a bogey of tax terrorism,” said a senior source. “HCC is fully tax-compliant. In the past two financial years, delays were caused due to a substantial lock-up of funds due from various government agencies. HCC is pro-actively engaged with tax authorities to resolve any outstanding issues concerning the same, including receipt of any notices,” the company said in response to a questionnaire from TOI. Three Essar Group companies also faced action, which have now sought compounding of cases along with Lodha Developers.

“Essar Group companies are by and large up to date in payment of all statutory dues. Some group companies may have had to delay some payments due to factors and business cycles beyond their control. The delays, if any, towards TDS are being addressed in discussions with the tax department and the respective companies are entering into compounding arrangements with the relevant tax departments, for an early and satisfactory closure,” an Essar spokesperson said.

A spokesperson for Eros InternationalNSE 1.12 % said, “Eros International has complied (with) its TDS obligation for the financial year 2016-17 and 2017-18 and there has been no action on the company.” Some of the companies — Lodha Developers, 3i Infotech, Bombay Rayon and E land Apparel — did not respond to questionnaires e-mailed on Tuesday evening. Three companies could not be reached for a comment. Sources in some of the companies approached for comment said they had cleared the dues.