India is eyeing several changes to the electronic-way bill system, ranging from auto calculation of distance for movement of goods to barring businesses from generating multiple e-way bills based on one invoice, as it cracks down on evasion in the goods and services tax (GST) framework.

E-way bill system will be enabled to auto calculate the distance for movement of goods based on the postal PIN codes of source and destination locations while allowing a variation of only 10%. That is if the system has displayed the distance between Place A and B, based on the PIN codes, as 655 kms; then the user will be able to enter the actual distance up to 720 KM (655KMs + 65KM), according to the new conditions.

Tax experts reckon that tax evasion continues to be a major concern for the government, and it is increasingly relying on technology to plug the gaps. 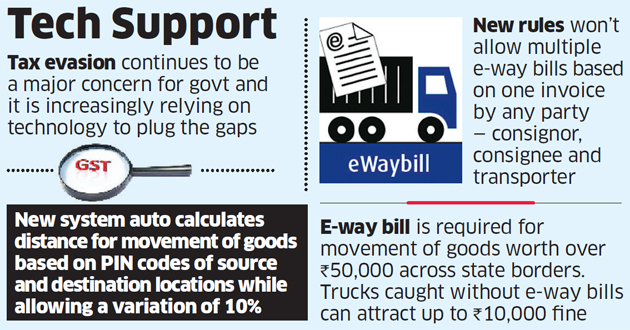 “The recent changes are another example of how the government is relying more on technology to ensure compliances — case in point being auto population of actual distance between supplier and recipient based on PIN codes and automatic blocking of inter-state transaction for small composition dealers,” said Harpreet Singh, partner, indirect taxes, KPMG.

The proposed system will also bar generation of e-way bill for interstate movement by composition taxpayer. This is being done to plug a loophole in the system as the GST Act does not allow the composition tax payers to do Inter-state transactions.

“With some of these changes such as automatic calculation of distance between two locations via PIN codes and one e-way bill for one invoice, coupled with greater focus on RFIDenabled vehicles, tracking the consignments might be easier for the government,” said Pratik Jain, national leader, indirect taxes, PwC.

However, it needs to be ensured that flexibility is built in the system to take care of exceptional situations such as diversion of vehicles due to road blockage, etc., where the actual distance travelled may be more than 10% of the distance calculated by the system, said Jain.

This has been done following representations from transporters.

An e-way bill is required for movement of goods worth more than Rs 50,000 across state borders. Trucks caught without e-way bills can be levied a penalty of up to Rs 10,000. Besides, the cargo itself can be inspected to ascertain tax evasion. A penalty to the tune of 100% of the tax being evaded can be levied along with the tax itself if evasion is proven and both the vehicle and goods can be impounded.

The e-way bill mechanism is an integral part of the GST regime that’s aimed at plugging evasion, which was one of the reasons cited by the government for subdued GST revenues prompting the GST Council and government to take steps to counter it.

The government has estimated Rs 6.43 lakh crore from GST in 2018-19. India rolled out GST from July 1, 2017, to replace multiple state and central levies.