The Narendra Modi government’s last budget before the general election will focus on India as well as Bharat as it strives to win a second term in office.

The interim budget, which is likely to be much more than a vote-on-account, will draw from precedents established by former finance ministers Pranab Mukherjee and P Chidambaram, who did not shy away from introducing tax measures as part of stimulus packages, said a senior government official.

The budget, the sixth by this government, is likely to include some tax sops for the middle class and also unveil measures to alleviate rural stress. “Finance ministers have in the interim budgets in past announced sops,” the official said.

A farm package has been in the works with various options including income transfer, a more liberal minimum support price (MSP) scheme, and interest waivers for crop loans repaid on time on the table. 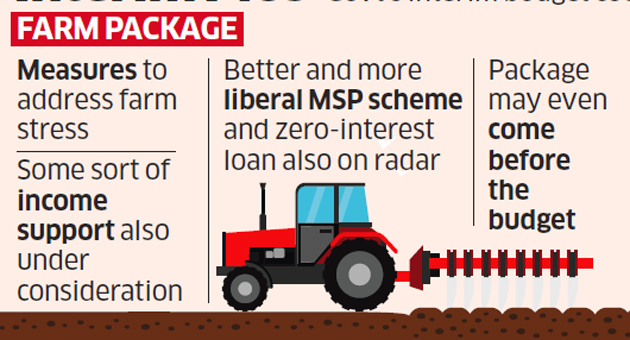 There has also been some discussion among policymakers that contours of the package be announced soon after they are firmed up rather than await the budget. Number crunching for the various farm package options has been completed, said another government official. A PTI report said the package could be announced as early as Monday. Interim FM Piyush Goyal will likely announce the budget on February 1 with Arun Jaitley recovering in the US.

LONG-LASTING IMPACT
Many state governments have announced farm loan waivers, but the Centre has already indicated that it considers this a palliative and is looking at something that will have long-lasting impact.

TAX SOPS NOT RULED OUT
In his reply to the debate on the interim budget for 2009-10, Mukherjee had announced a 2% cut in service tax and excise duty to boost the economy hit by global slowdown. Chidambaram announced excise duty cuts for the automobiles sector besides tweaks to service tax and customs duty in the interim budget for 2014-15. Both, however, refrained from changes to the direct taxes regime.

“Farmer sops and a cut in personal tax rates appear to be high on the agenda,” said Rohington Sidhwa, partner, Deloitte, Haskins & Sells .

Service tax and central excise duty, barring that on petroleum products, have been subsumed into goods and services tax (GST) with decision making on the levy being the GST Council’s domain .

Tweaks to the customs duty regime to boost Make in India as also to provide some relief have been examined in the run-up to the budget 2019. Some incentives to boost digital transactions and relief to taxpayers in the form of higher deductions or higher exemption limit to ?3.5 lakh are being examined. Tax cuts are being weighed with the fiscal situation that’s under pressure from lowerthan-expected collections from GST, disinvestment and spectrum sales .

Also, a higher exemption limit means more taxpayers will drop out of the tax net, which is expected to cross 70 million this year. That might undermine the government’s intent of broadening the tax base. The government had last year brought back standard deduction, which could be raised to give relief.

“The finance minister could also announce a timeline to ratification of the Multilateral Convention to Implement Tax Treaty Related Measures to Prevent Base Erosion and Profit Shifting or MLI,” said Sidhwa. “The committee in charge of the DTC (direct taxes code) has also started to operate under a new chairman. There is also some expectation of an update on the “progress being made in this area.”

BLAST FROM PAST
Interim budgets usually dwell on the achievements of the outgoing government, making the case for re-election. The upcoming budget will highlight the steps taken by the government over the last over four and a half years in various spheres, including black money, GST, infrastructure creation, ease of doing business, empowerment through various schemes such as Ayushman Bharat, Ujjwala and Saubhagya and hastening bad loan resolution through the Insolvency  and Bankruptcy Code.

Ministries and departments have been asked to give details of key achievements and these could be included in the budget.