The income tax department’s plans to arm itself with an SC order to boost year-end recoveries have hit a roadblock.

The authorities had approached appellate tribunals over the past few weeks, seeking to challenge stay orders granted to assessees that are over six months old, based on an apex court judgment in March last year that stay orders will not extend beyond six months, irrespective of whether a case is civil or criminal.

However, in a ruling on March 15, the income tax appellate tribunal (ITAT) dismissed an appeal by the tax department seeking to vacate a stay granted to Piramal EnterprisesNSE -0.57 % in a matter where the latter has disputed a demand made by the department.

The ITAT noted in its judgment that the stay orders had been granted to Piramal Enterprises as the case was still pending adjudication and that the delay was not attributable to the company, thereby clearing the grounds for grant of the stay.

ET had reported in its edition on March 11 that the income tax department was preparing to use the Supreme Court order as a tool to enforce its demands against assessees who have disputed these at the ITAT and have been granted a stay beyond the six-month period. 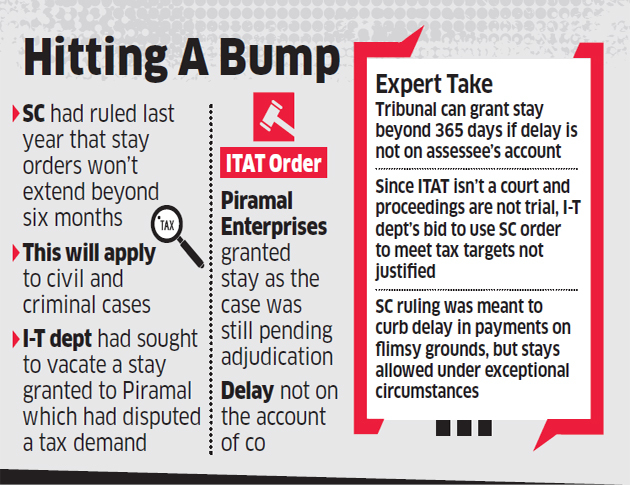 “This judgement will be a relief to genuine tax payers who have been granted a stay and wherever the delay is not on account of the assessee the tribunal will be able to grant stays beyond 365 days,” said Ronak Doshi, partner at CA firm Bansi Mehta & Co.

According to senior chartered accountant Dilip Lakhani, “In February this year, the Bombay High Court in a writ petition did not uphold the IT dept’s stand, which was relying on the SC ruling.

Since ITAT is not a court and proceedings are not trial, the faint attempt by the department to upset the judicial order to meet target is also not justified”.

The tax department argued that its grounds for asking for the stay to be vacated were based on the Supreme Court judgment in a case involving Asian Resurfacing of Road Agency and the Central Bureau of Investigation (CBI) where the apex court ruled that stay granting orders by courts would lapse after a period of six months.

“The intent of the apex court’s judgment is to ensure that people don’t use flimsy grounds for delaying payments by getting stay orders,” Transactions Square’s founder Girish Vanvari said. “Even the apex court has noted in its judgment that in exceptional circumstances a stay can be granted.”

In the case of Asian Resurfacing of Road Agency & others versus (CBI), which the I-T department is relying on, the apex court on March 28, 2018, said: “Delay in trials affects the faith in rule of law and efficacy of the legal system. It affects social welfare and development. Even in civil or tax cases it has been laid down that power to grant stay has to be exercised with restraint… In cases where stay is granted in future, the same will end on expiry of six months from the date of such order unless similar extension is granted by a speaking order. The speaking order must show that the case was of such exceptional nature”.

The tax departments desperation stems from a stiff target of Rs 12 lakh crore fixed in the interim budget. Total net collection as on March 7, 2019 was a little over Rs 8.45 lakh crore. The move to approach ITAT was endorsed by PC Mody, chairman at Central Board of Direct Taxes, ET previously reported.

Appeals against tax demands are usually made by an assessee at the office of the commissioner of IT appeals where it has to deposit 20% of the demand amount at the time of obtaining a stay.