India is likely to soon announce concessions to shield startups from the so-called ‘angel tax’, including relief from levies on past investments as well.

The changes will be made to conditions specified for benefits under Section 56(2)(vii)(b) of the Income Tax Act, 1961, to remove any ambiguity and allow exemption for past as well as proposed investments that do not exceed Rs 10 crore, including paid-up share capital and premiums. The need for an inter-ministerial group to approve exemptions may also be scrapped on investments up to Rs 10 crore.

“Changes are being finalised… notification will be issued shortly,” a senior government official told ET. This will provide relief to startups that have already received tax demands . 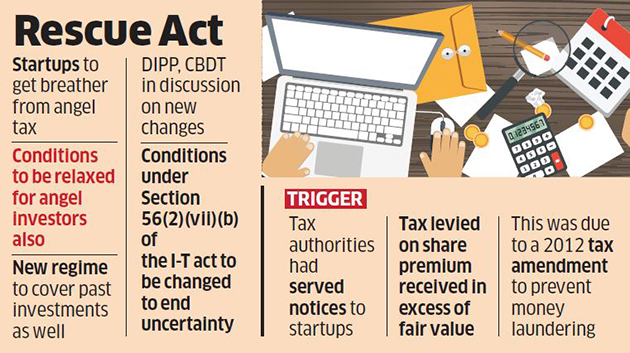 Angel tax is applicable on capital raised by unlisted companies from any entity against an issue of shares in excess of fair market value. The Department of Industrial Policy and Promotion (DIPP) and the Central Board of Direct Taxes (CBDT) are in discussion over the changes to the startup taxation regime .

A number of startups got income tax notices after showing up under Computer Aided Scrutiny Selection (CASS). The authorities sought to levy tax and in some cases even penalties on the funding received by some early-stage startups.

“It’s critical to provide a carveout or an exemption to startups which have raised funding from credible sources. The provision which is troubling them is an anti-abuse provision which ideally should not apply to such startups,” said Amit Maheshwari, partner, Ashok Maheshwary & Associates LLP. Commerce minister Suresh Prabhu had taken up the issue with the finance minister after which CBDT directed tax officials not to pursue coercive action till the issue was fully re-examined.

Under Section 56(2) of the Income Tax Act where a closely held company issues its shares at a price more than its fair market value, the amount received in excess of the fair value will be taxed as income from other sources. This section, touted as an anti-abuse measure, was introduced by former finance minister Pranab Mukherjee in 2012.

Startups approved by an inter-ministerial group do not face the tax. The DIPP had in 2016 launched the Startup India policy to build a strong ecosystem for nurturing innovation and entrepreneurship. Startups also enjoy income tax benefit for three out of seven consecutive assessment years. A number of sops were unveiled by the government, but the notices have rattled the sector.