Indian businesses may soon be able to amend goods and services tax (GST) return mandated for carrying forward tax credit from the previous regime for non-IT related errors as well. The GST Council has directed a committee for IT grievance redressal to quickly draw up a solution that will give relief to industry.

Thousands of crores of tax credit claimed by businesses have been denied because of errors in the filing of returns, prompting many to approach judiciary. The move will be a reprieve for businesses that had lost credit due to minor, non-technical errors.

“The council has approved changes in cases where the error is not IT related,” a government official aware of deliberations told ET. It was felt that in some areas where errors are apparent or high courts have issued directions, those should be settled, he said.

A standard operating procedure will be developed by the grievance committee for all the cases where high courts have given a direction, the amount has been wrongly entered or the concerned jurisdictional commissioner has made a recommendation. The forms TRAN1 and TRAN2, specified for claiming past credits, can now be amended to allow for this.

The GST law does not provide for any appeal on issues related to TRAN1 or TRAN2 and thus many taxpayers filed writs in high court and also secured favourable orders holding the view that bona fide errors should be considered by the government. A number of taxpayers had lobbied the government and the GST Council to allow amendments. 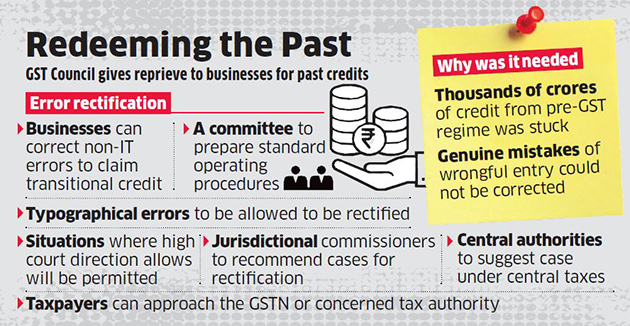 “Lot of companies could not claim the entire eligible opening credit under TRAN1 due to inadvertent errors,” said Pratik Jain, national indirect taxes leader, PwC. “This move will help them to claim the additional amount, without going to courts, which some of them have already opted for.”

Businesses looking to claim tax credit of the pre-GST period under GST could file TRAN1. The government had allowed revision of TRAN1 until December 27, 2017. Many businesses missed doing so and ended up losing large transitional credits, even for typographical errors.

The GST Council had allowed a liberal scheme for claiming credit in lieu of taxes paid under the previous regime against GST liabilities. Businesses could claim credit even if they did not have proof of payment under the deemed benefit provision. However, large transition credit claims, which pulled down overall GST collections, made authorities wary, leading to increased vigil. Any changes to the TRAN1 were thus not allowed on non-IT related issues.

Reports of fraudulent credit claims also led to inquiries into transitional credit claimed by businesses to ascertain if they were genuine.

“Transition credits have been challenging for all businesses and the IT grievance redressal committee should ideally be considering all issues for the entire period instead of a sunset period and clarify that all genuine errors, whether arising from the GSTN portal issues or committed by the taxpayers would be condoned unless there is mala fide intent,” said MS Mani, partner, at Deloitte India.