India is looking to introduce a more liberal competition law to facilitate mergers and acquisitions and a revamp of the limited liability partnership (LLP) framework, a senior government official told ET.

These changes are to be part of the corporate affairs ministry’s agenda for the first 100 days of the next government. Also on the anvil are a formal mediation and conciliation mechanism under the Insolvency and Bankruptcy Code (IBC) and know-your-customer (KYC) norms for professionals such as chartered accountants and company secretaries.

“There are a number of things lined up,” the official said.

The conciliation process will allow for a window before a company is taken to bankruptcy court.

“We will look at a very strong concept of mediation and conciliation in the IBC because that’s very critical,” said the official. He pointed out that India follows the cash-flow test and not the balance-sheet test.

That means even a temporary liquidity hiccup can force a company into the insolvency process.

He said 6,500 cases got resolved before admission to the National Company Law Tribunal (NCLT) due to informal mediation.

The official said the ministry may allow automatic approval for M&As under a certain threshold based on self-declarations.

“The idea is can we have a green channel and a red channel… declaration on thresholds,” he said.

“The CCI (Competition Commission of India) can post facto look at it and if it feels that you’ve given a wrong declaration, then you have to answer them.”

The ministry is also aiming for a review of minimum size threshold for merged entities to be taken up for approval by the antitrust regulator — a concept that’s key to ease of doing business. The Competition Act currently exempts from its purview acquisitions of enterprises with assets worth less than Rs 350 crore and turnover below Rs 1,000 crore.

This needs to be reviewed as investments may not be very high as in the case of new technology companies. In such cases, the future potential will need to be estimated, the official said. Such a determination will require some sort of enabling framework as the system may not be equipped to deal with such eventualities.

One option is deal value, but only one or two countries have adopted this. “We may also not be in a position to do it but may want to have it as an enabling provision if we decide to do it,” he said.

Deal value is the sum of the amount paid by the acquiring company for an equity stake in a target company and the net debt of the target company in a merger or acquisition. The inclusion of net debt in the calculation can vary based on the proportion of the stake being acquired. The CCI currently evaluates transactions on the basis of asset value, or turnover value of the combined entity.

The official said the new competition law review committee has examined the Competition Act and the report will be presented to the new government.

The KYC details for professionals will call for certain disclosures such as companies handled by the person in the past and so on.

This will help companies get a complete profile of the professional it seeks to engage. “I believe, through this technology, we will raise corporate governance standards significantly,” the official said.

The ministry is also looking to revamp the LLP structure to make it more effective and prevent abuse. The official said the ministry could restrict the type of businesses that can become LLPs or, if no curbs are to be put in place, have higher corporate governance, disclosure and enforcement standards. 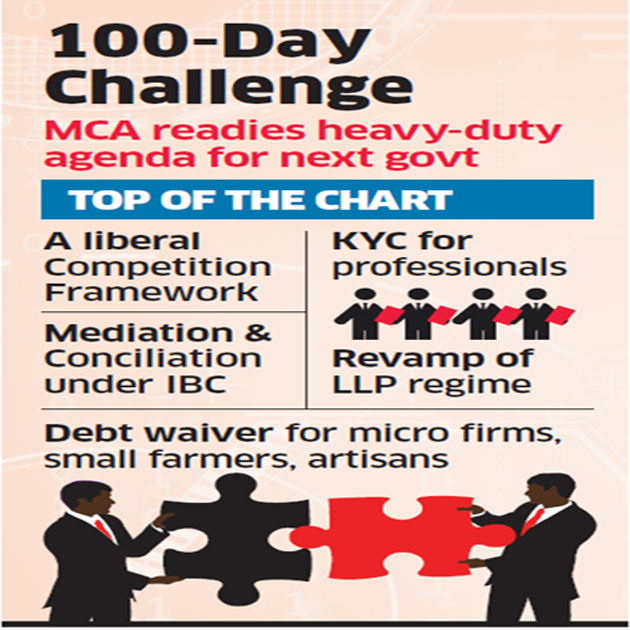